Do you know Johan Elfrink? Now you will! The Dutchman, born in 1957, is a big fan of motorsport since years. He started in Autocross, drove Enduros and Formula V. Since 2004 he is participating in the rallyraid sport, he started his first Dakar with a Buggy and later changed in the trucks category.

Since years he is also well known for his favourite brand: Mercedes. In the past years he started with Unimog, Axxor and Actros, mostly known as "Finstral Team". This year he and his team are back: With the new team-name "All Star Rally" and an all-new Mercedes Zetros Truck. 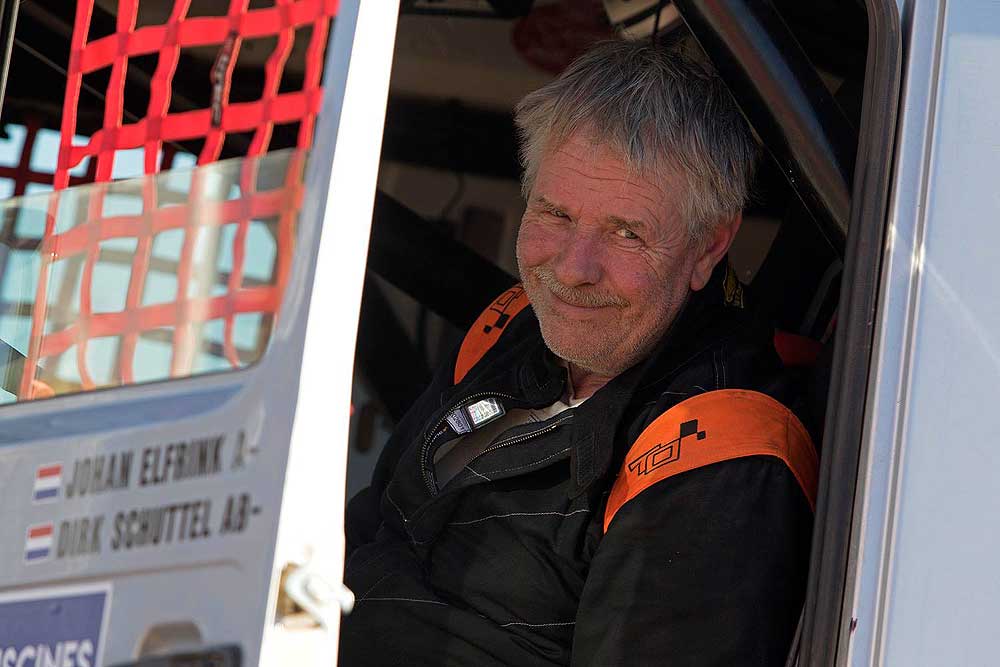 In the Africa Eco Race after SS03 Elfrink and his navigator Dirk Schuttel are on 34th position with a gap of 08:15:05 hours to the overall leader Vladimir Vasilyev, in the trucks (T4) they are on 9th position. With only some little test kilometers, the tension was mainly about how the new truck would perform in the race.

"The first 100 kilometers were interesting," Johan Elfrink said. "We were looking what the truck is doing. You hear a lot of strange and new sounds that were different to the old truck." In the first stage the power steering fell out. This made the truck almost uncontrollable. "The problem was found quickly, the cooler could not handle the pressure of the power steering."

After a long night for the mechanics, the Dutch team started in the second stage. "First we had some problems with the tire-pressure system. We had to stop and reduce the pressure manually before the dunes," the team reported. After the first dune passage the ground became hard again and the vibrations in the truck were so intense that various parts came loose. "We had to stop and repair the damages in the track, so we again lost a lot of time." Finally the team reached the bivouac at 11 pm after 13 hours of driving.

On Thursday after a second long night for the mechanics, the team could start at 10 o'clock in the morning - behind the field as 82nd. But the new Mercedes Zetros was running well: "It was a very nice stage to drive," Elfrink said. "No bad things happened, we were driving smoothly and could pass over 50 competitors!" We will see how the things are going on - and especially the premiere of the all-new Mercedes Zetros...