The Portuguese driver Elisabete Jacinto finished Wednesday in the fourth place among the trucks the second stage of the Africa Race 2018, whose selective sector of 443 kilometers was disputed between Merzouga and Foum Zguid. The Bio-Ritmo team took 07:06:45 hours to complete this long and very demanding day and, with the result achieved, climbs a place in the overall standings table and is now in the fourth position in the T4 category.

The special began with a complex passage through the Erg Chebbi dunes where the Portuguese suffered a setback that made them lose more than 40 minutes. The truck got stuck in the soft sand and it took a lot of work to remove it from the place where it got buried. But the Portuguese trio, composed by Elisabete Jacinto, José Marques and Marco Cochinho, didn’t fade away. As soon as they were able to solve the difficulty, they started a brilliant recovery that made them move up from a modest 12th position, their classification in CP1, to the fourth place at the end of the stage. 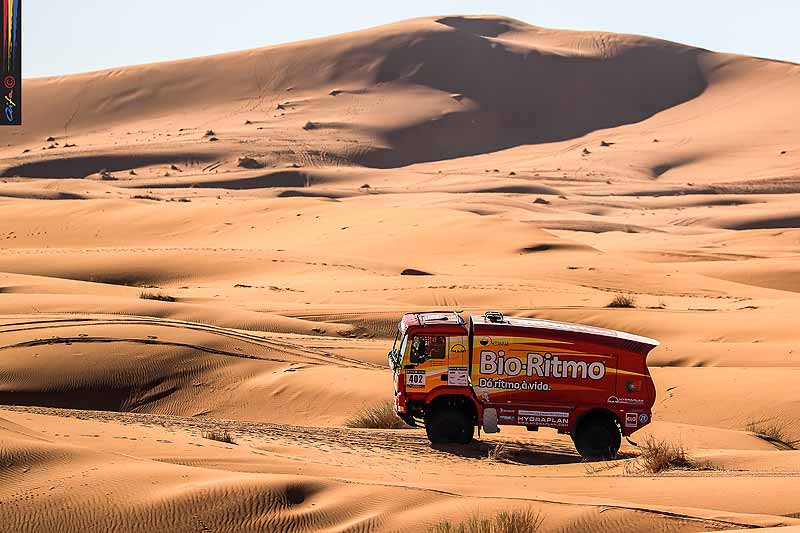 For Elisabete Jacinto, although hard and tiring, this was a very rewarding stage: "The Erg Chebbi's crossing was truly stressful. We were passing the dunes very well but at a point the truck got stuck in the sand. We stopped for over 40 minutes to dig and we saw all the competitors coming by. It was a despairing. But as soon as we got out of there we printed the fastest pace we could and fortunately we didn’t have any more complicated situations, even though we made lots of dune crossing."

"The hardest part was to pass so many riders. However, we gave our best. At the end of the special we speeded up and we were able to make a very positive result. We are happy," said the driver who is currently in the 19th place in the classification of cars and trucks.