Breslau Rally Poland: MB 6x6 - Sometimes it has to be big and heavy duty

"Once infected by the ´Breslau-Virus´, you can't get rid of it," says the North-German transport entrepreneur Ralf Neubert, who has been part of the Rallye Breslau Poland for over 10 years and is a fan of large heavy trucks. Older Breslau-Fans will remember remember the Russian-made, red-yellow Ural Trucks of the early 2000s - and the big, unusual team behind them. Neubert started his Breslau-career with this team. 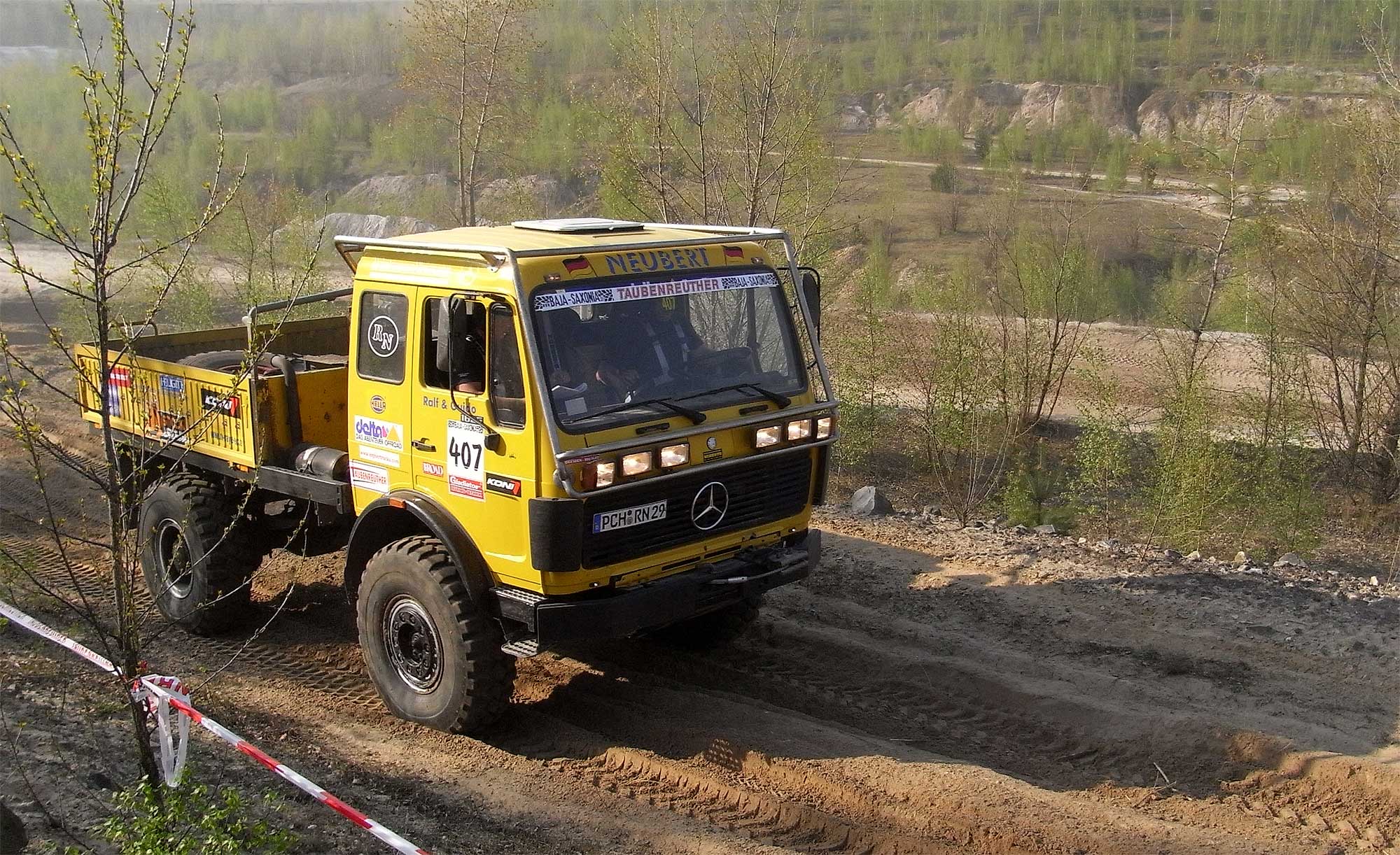 "Everything started when the Ural-Team of the German Matthias Mueller was looking for a navigator," recalls Ralf Neubert. "I said `Yes" and participated as a co-driver for the first time in 2005. That was so much fun that I decided to drive for myself with an Ural for the next two years (2006-2007). After the former team broke down we started looking for a new suitable vehicle."

The team decided for a rather unusual Mercedes Benz SK 4x4 V8, short and suitable for all-wheel drive - but not really a "racing truck". "My son Guido joined the team in 2008 and we've been riding together ever since," says Neubert. Until 2011, they relied on the short Mercedes all-wheel-drive truck - then something new had to be found. And this time a much bigger and more duty Mercedes SK 6x6 should be the new instrument - but built more professional than the former truck.

The new race truck was rebuilt from scratch. A Mercedes Benz SK 1936 4x4 was the basis - they transformed it into a 6x6. The rear axle was dismantled and replaced by a double axle construction. Powertrain, axle design and suspension were adapted to the off-road racing needs.

The cab was reinforced with an external cage, the three compressed air boilers installed behind the cab, supply lines adapted. Afterwards, the new 6x6 Mercedes was fitted with a self-constructed tubular frame structure covered with foil blinds. The colour was chosen for a striking poison green - still the team's distinguishing feature today.

In 2012 the new 6x6 rally truck was ready - and is still in use today, besides the Rallye Breslau Poland also on the former MT Rally, Baja Deutschland and since 2017 also on the Balkan Offroad Rally in Bulgaria.

Truck and Team are ready to tackle again the Polish grounds this year. "Our team leadership still consists of father and son with the support of many different helpers," explains Ralf Neubert. "On average, we're usually 5-6 people." 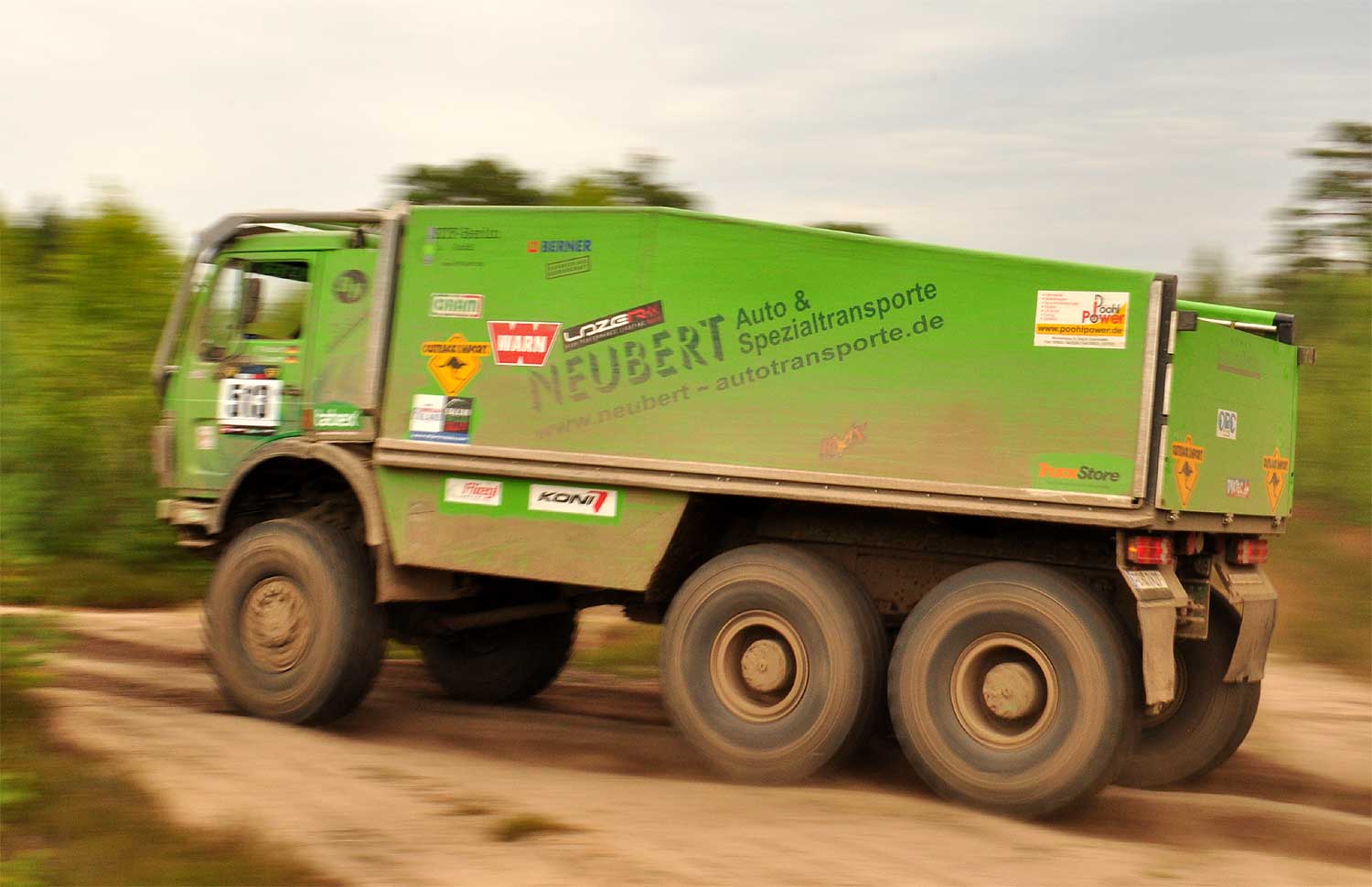 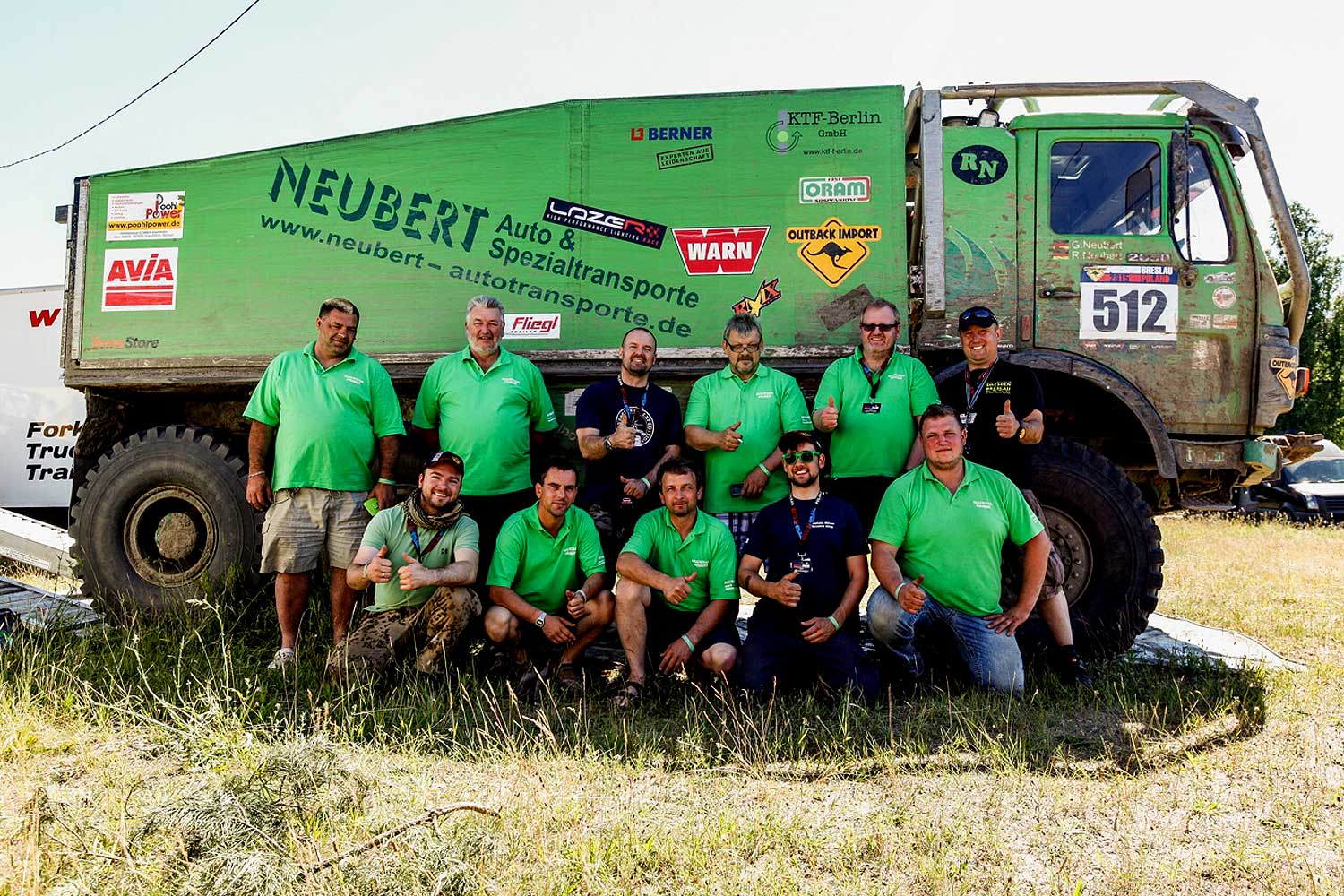 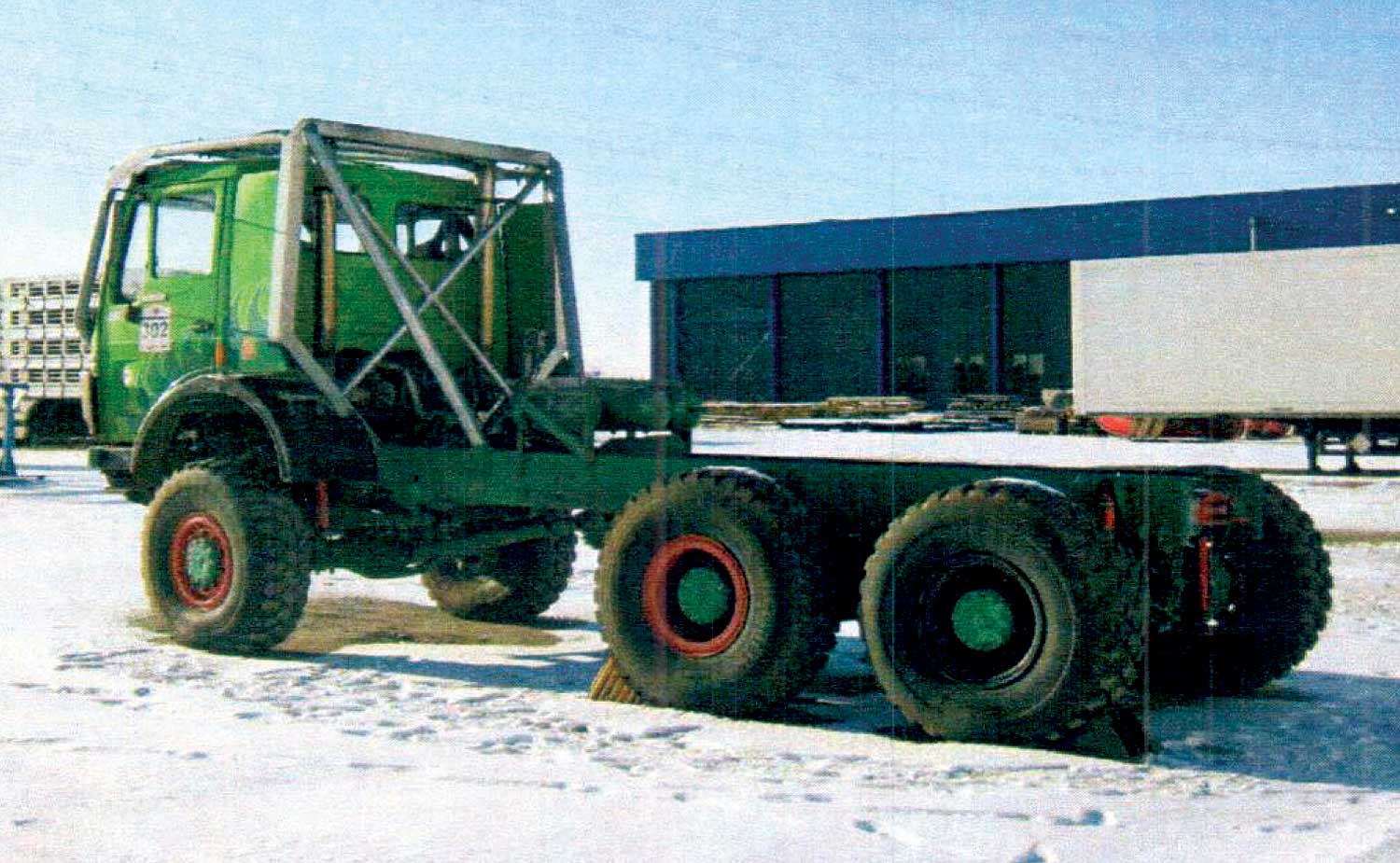 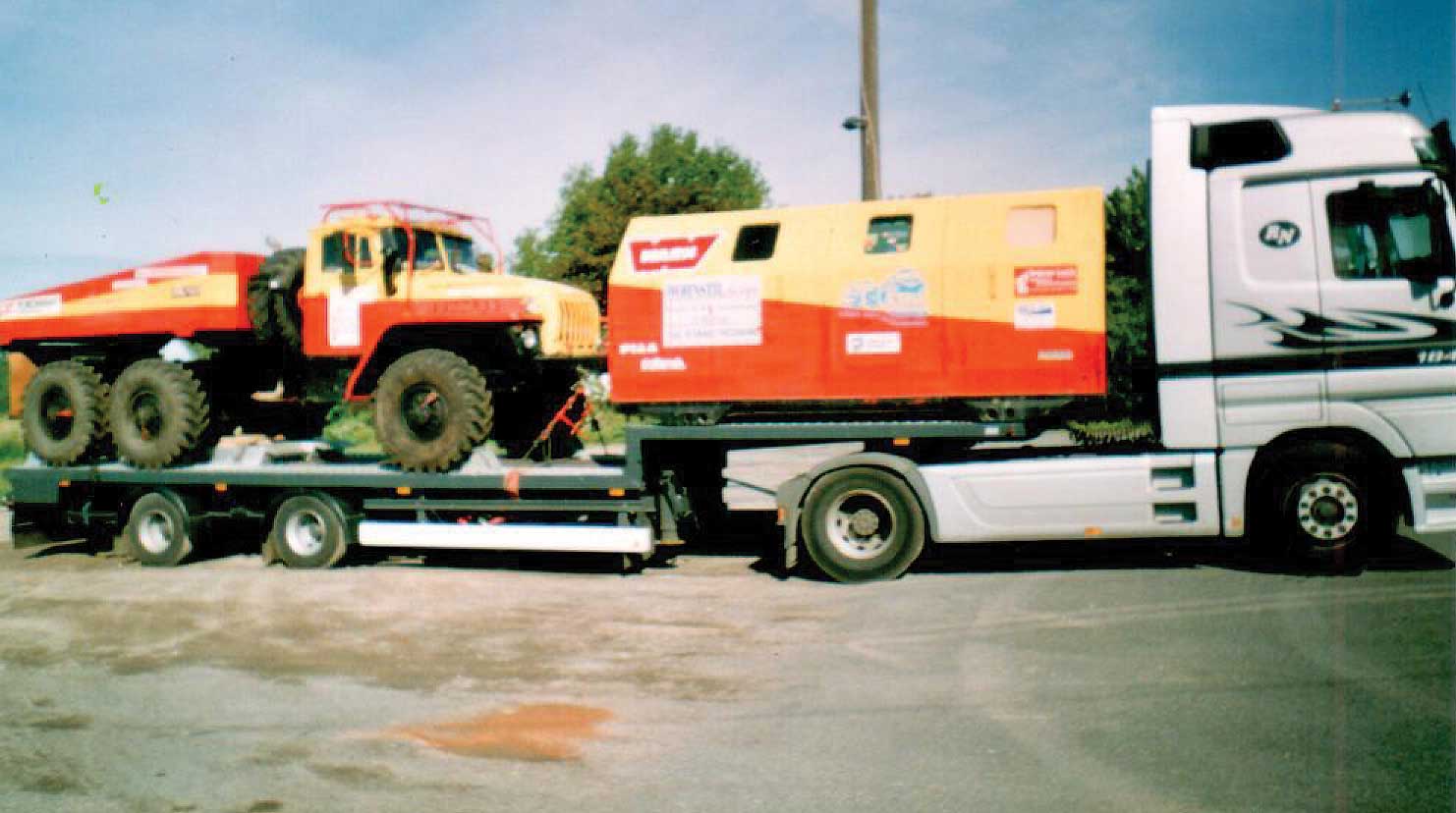