The recent success of the MAZ-SPORTavto team at the Dakar Rally 2018 will have a positive impact on the sales of the Minsk Automobile Plant (MAZ) products, Belarus' Vice Premier Vladimir Semashko said at a meeting in the MAZ Cultural Center to honor the MAZ-SPORTavto team. "This is an extremely important and significant victory. I think the second place is also a victory. It improves the prestige of the MAZ brand, creates an image, and this will certainly benefit all the aspects, from design and production to sales of vehicles," said Vladimir Semashko. 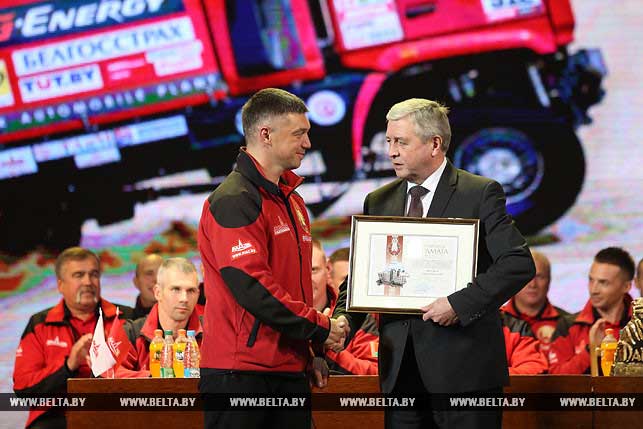 The vice-premier wished the MAZ-SPORTavto team more success in the future. Vladimir Semashko emphasized that the Belarusian truck that took part in the competitions is a serial vehicle while many competitors usually produce special vehicles for the rally. "This is an evidence for many customers that the preference should be given to MAZ, especially in such extreme conditions,” the vice premier said. In his words, over the past years MAZ has its difficulties due to both subjective and objective reasons.

"However, in late 2017 the plant turned profitable, and the forecasts that we have made for 2018 show that MAZ would significantly add both in volumes and profitability. This will give more opportunities to the company, including the MAZ-SPORTavto team," said Vladimir Semashko.

Sergei Vyazovich's crew of Belarus' MAZ-SPORTavto team finished second overall at the 2018 Dakar Rally in the truck category. Russia's Eduard Nikolaev (Kamaz) won the rally. The 2018 Dakar edition was the seventh for the Belarusian team. The owner of MAZ-SPORTavto is Minsk Automobile Plant (MAZ trademark), the technical partner is velcom.