The Dakar Rally has entered Bolivia and, as expected, it brings to the table a completely different race than the one offered by the Peruvian desert in the opening stages. The altitude and the weather have already taken their toll in this first day of crossing borders and the first part of the bikes’ timed sector, which was neutralized for motorcycle riders due to the treacherous conditions. Consequently, after a long 356 km liaison, the bikes have tackled the remaining part of the 194 km timed section, which started on the shores of Lake Titicaca. 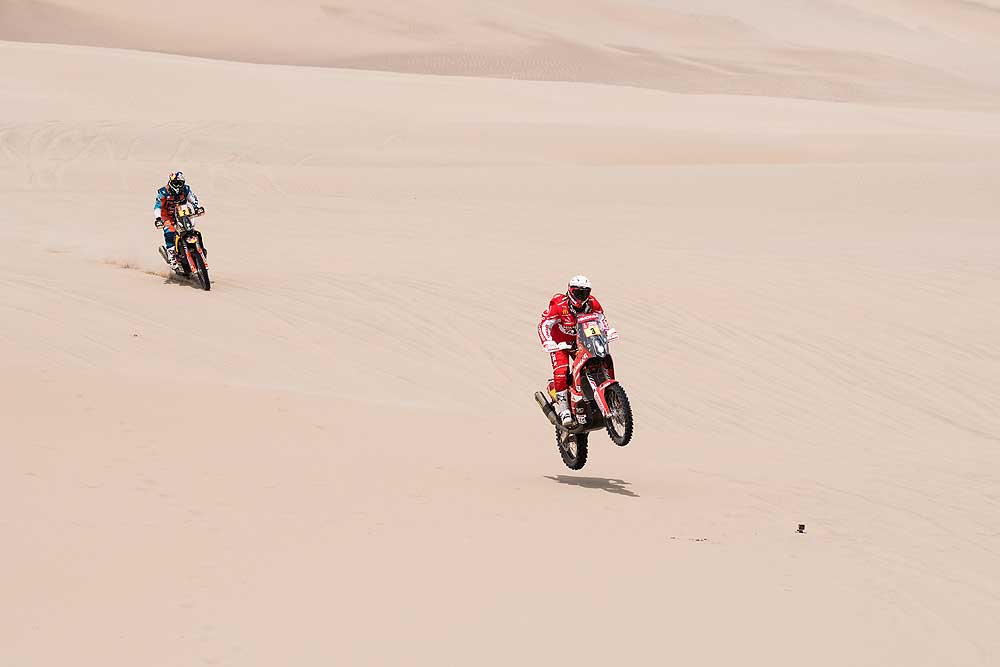 A new stage is set, which also requires a change of strategy which was immediately noticed at the first checkpoints where the differences between the favorites were reduced to a few seconds. Faced with this new situation, Himoinsa Team´s Gerard Farrés from Spain has once again proven his impeccable race management skills, while keeping up with the leading group’s pace. This has allowed him to stay in the top 10 of the general classification, where there has been a leader change, with the Argentinian Kevin Benavides (Honda) sneaking into the head of the classification.

However, the day’s revolution came from Dani Oliveras, who has stepped up his game both technically and speed wise, and despite his clear bike disadvantage, stood up to the big names of the race. Oliveras fought for the stage victory since the first checkpoints, at one point being the second fastest rider and finishing the day in fifth position, just 1:55 minutes off the stage winner, the French Meo (KTM). This makes Dani Oliveras the best private driver of the stage, the best Spanish and the only one capable of finishing in the top 10 today. A spectacular performance that keeps the Himoinsa Team rider in the top 20 in the overall classification, after the final stage before the well-deserved rest day in La Paz.

Very good day also for Marc Solá, who only gave 7:33 minutes at the finish, placing him near the top 20 on the day and climbing positions in the general. On the other hand, Iván Cervantes is little by little finding himself in better physical condition after the fever problems which he suffered during the first days. Rosa Romero, once again, was consistent throughout this sixth stage of the 2018 Dakar.