Dakar is "destroying" teams in 5th stage as well: Never-ending sand and hard dunes. The Dakar Rally is still beating hard all the competitors, especially for the big trucks. For the Renault Trucks designed by Czech MKR Technology, Gert Huzink from Holland was saving the situation. He has just missed the top 10 in 5th stage. But Mammoet Rallysport teams had heaps of bad luck.

Leader of Dutch team Mammoet Rallysport, Martin van den Brink with his Renault Sherpa, in the final part of 4th stage perforated his oil tank in one of bigger jumps and then stopped in a dune only some kms before the finish line, from where not even fast assistance of Janus van Kasteren could not dig them out. Thus Van den Brink did not make it in time to bivouac and then to the start line, so 40th edition of Dakar ended for him there. For the moment! 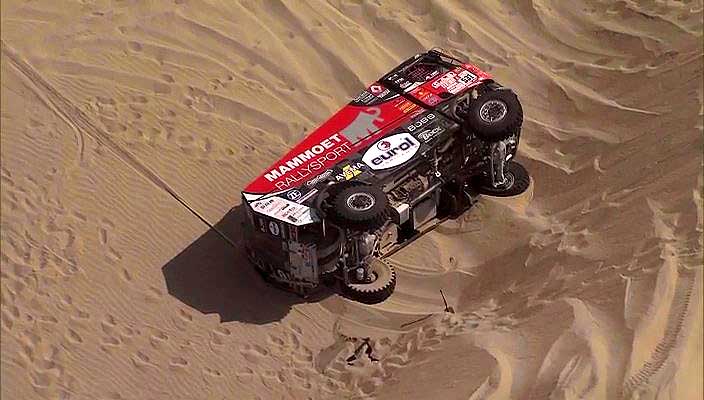 "What a pity. Sometimes it takes just details. Perforated oil tank is nothing, we could not handle. When I think of what we have successfully handled in the past, this is just a tiny thing. Unfortunately the dunes were deceiving and many hopes for a successful finish ended there," added Mario Kress, lead designer of MKR Technology team.

Mammoet was unlucky in 5th stage on Wednesday as well. This was the longest stage of this year. Right at the beginning Janus van Kasteren (Renault 4x4) stopped for three hours. He reached the finish line on 21st position with a gap of more than four hours on the Russian winner Nikolaev. Even Nikolaev turned his Kamaz to the side, but after receiving help from Czech Martin Kolomy (Tatra Phoenix) he returned quickly onto the winning wheels.

Gert Huzink is 12th and van Kasteren is just four positions lower. So all over now for the Renault Sherpa of Martin van den Brink? Maybe there is hope: The organizsation gave them a starting position for today´s SS06...