Organizers are not holding it back. This edition of Rally Dakar is extremely difficult right from the first stages. 3rd stage was no exception - vehicles going in somersaults and flips or early drop-outs were not uncommon. The three MKR Renault Racetrucks of the teams Mammoet Rallysport and Riwald Dakar all finished in the top ten: Mammoet´s Van Kasteren (Renault 4x4) finished seventh, Riwald´s Gert Huzink (4x4) eighth, followed by Martin van den Brink (Renault Sherpa) with Czech on-board MKR-technician Daniel Kozlovsky. 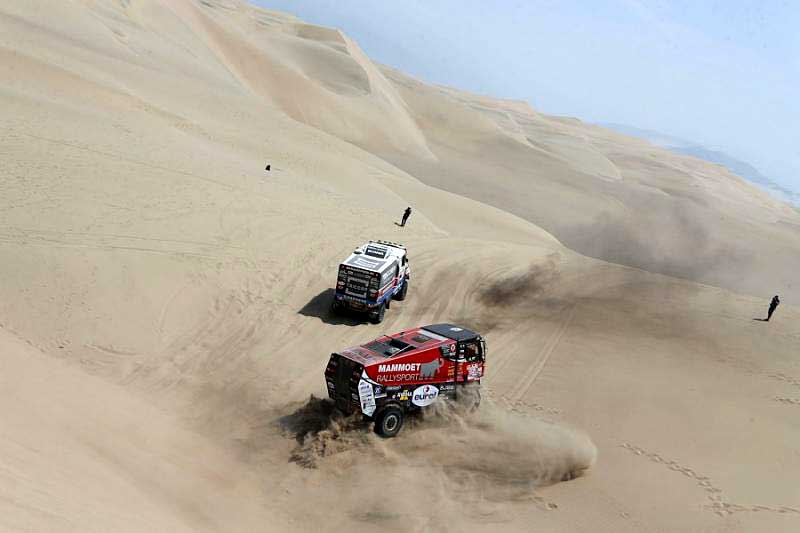 “It’s a massacre. This is the real Dakar. The sand is very soft, vehicles get buried in it very easily and dunes are huge and rolling, which is an awful combination," reported Kozlovsky. "You get lost and don't even know how this happened. Many trucks had troubles getting over the dunes." Kozlovsky's crew with Martin van den Brink were holding ninth position. They reached the finish after almost three hundred kilometers of special section trailing by 45 minutes behind Argentinian winner Villagra with Iveco.

"It is terrible to watch the conditions many teams are in when they get back to bivouac. Everyone is unbelievably beaten and it still just the third day. There is another eleven days ahead so anything can change in the ranking. I am glad, that except small navigation mishaps or flat tires, we have been avoiding any major troubles and we all believe this would happen. But Janus did a great job today," added Mario Kress, lead designer of Renault Trucks specials and author of MKR Adventure project.