Dakar Rally 2018: MKR Renault ´You cannot make it - but you cannot stop´

What a rally for the Dutch-Czech Renault-rallytruck cooperation between the truck-sports specialist MKR Racing and the two Dutch Teams Mammoet Rallysport and Riwald Dakar Team. "This edition was extremely hard and everyone can relief, that we are at the finish line," said Mario Kress, leader of MKR Technology team, which is also well known for their Tatra Racetrucks. 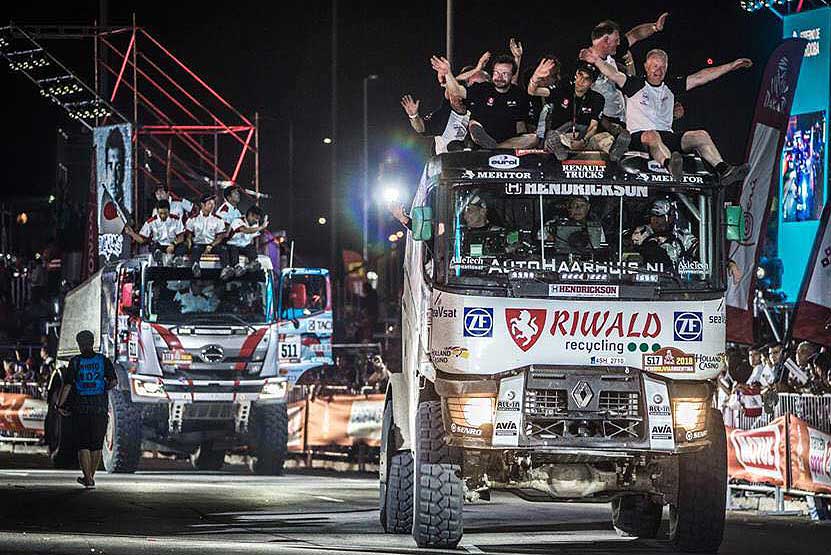 Like for many teams, the Dakar 2018 was full of mixed emotions for the Renault-crews. "It´s over and out," we heard from the Mammoet Rallysport Team after SS10. The team´s second Renault of Janus van Kasteren got stuck with a broken gearbox. The truck was towed for many kilometers by the French Michel Boucou, but from one point this didn´t work anymore.

The crew tried it again, meanwhile from the camp the DAF of the "Team Firemen" of Richard de Groot searched for the crew and finally towed it throughout the final liaison to the camp, which they reached at 8:00 am. They tried to repair but didn´t were allowed to start anymore because of the late time. Hard news for the crew because now the complete Mammoet team had to retire, after the Renault Sherpa racetruck of Martin van den Brink withdrawed earlier in SS06.

So all the eyes of MKR were now on the Renault 4x4 of the Riwald Dakar Team with Pilot Gert Huzink. They also had their problems but finally finished in a very good 7th position overall.

„You go through many things at The Dakar – rises, falls, strong emotions, absolute exhaustion, joy, desperation. There are moments, when you think, you cannot make it while you know, that you cannot stop. I am happy for the people I am working with and for what we have accomplished together. This was a great test again and we got a lot of valuable data and experience. This Dakar is slowly over and we can slowly relax,"  Mario Kress summarized the 40th edition of Dakar.