The season’s main event is finally upon the Monster Energy Honda Team as the 2018 Dakar Rally kicks off this Saturday, 6th January in Lima. The squad will be aspiring to the top final positions on the final podium when the race closes in Cordoba.

The team on Thursday made it through the administrative and technical checks prior to the start. The five Honda CRF450 Rally are now closed in the parc ferme awaiting the moment of truth as the greatest challenge to man and machine gets underway. There will be no margin of error this time out with the team’s clear objective being an overall triumph.

Joan Barreda is fully fit and recovered from the left-arm injury which delayed his Dakar preparations. Despite everything, Joan has had a blistering year with victory in the Baja Aragón and the Vegas to Reno race. Barreda, according to the pundits, is one of the favourites to take the overall title. 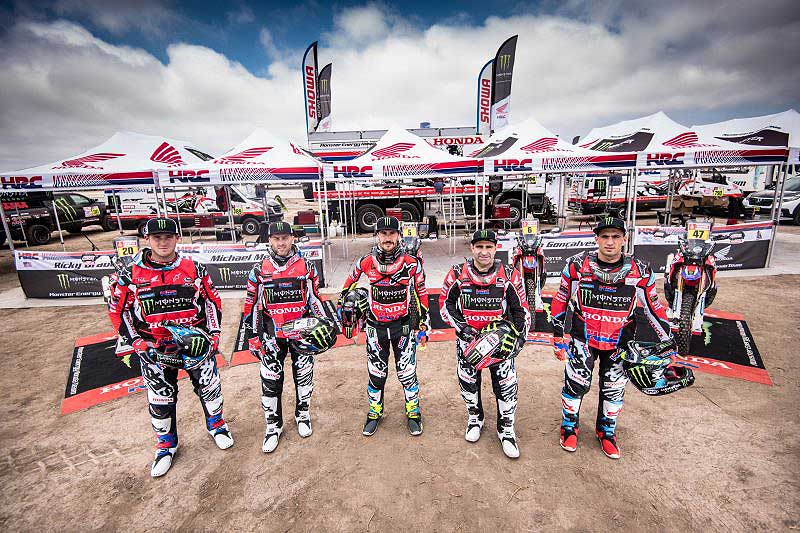 Kevin Benavides is also on cracking form and fitness and arrives at the Dakar hungry to prove himself in this edition. Last year an untimely right wrist injury ruled the young Argentine rider from Salta out of the race. This year a fully-recovered Kevin has bounced back and proved to be unbeatable in the Desafío Ruta 40 and placed second in both the Atacama Rally and the Morocco Rally and posted an overall third spot in the Baja Inka.

American Ricky Brabec is another rider with a point to prove in the 2018 Dakar. After dominating the desert races in North America, he raised trophy at the Sonora Rally and the Vegas to Reno before closing 2017 with a podium place in Morocco. Brabec, of course, last year clinched his maiden Dakar stage win.

Michael Metge, meanwhile has come on leaps and bounds and continues to go in search of a top result. The Frenchman, as well as being a reliable point of support for team-mate Joan Barreda, awaits his shot at glory in the world’s greatest challenge.

Just when the team appeared to be on top form comes some gloomy news: Paulo Gonçalves has had to drop out of the 2018 Dakar Rally. The Portuguese rider suffered a mishap in training a few weeks before heading out to Lima, injuring his right shoulder and left knee in the process. The team stalwart, who hails from Esposende, Portugal received immediate medical treatment in the hope of making a recovery for the race-start, but unfortunately shortly after the team passed the final checks, the valiant Portuguese rider was forced to renounce his place in Lima this coming Saturday. His place will be occupied by the young Chilean rider José Ignacio Cornejo. ‘Nacho’, 23, who was the FIM Junior World Cross-Country Rallies Champion in 2016.

On behalf of the Monster Energy Honda Team we wish Paulo Gonçalves a swift recovery and hope to see him as soon as possible back in the bivouac racing at the same high level that he has done all season.