The Argentinian Mini-crew of Orlando Terranova and Bernardo Graue quickly settled into SS12 and pushed hard to take the lead and held it until near CP2, when a puncture required attention. Despite losing time, the pair continued pushing the now front runners. It was a happy crew that eventually finished the stage in 4th place. 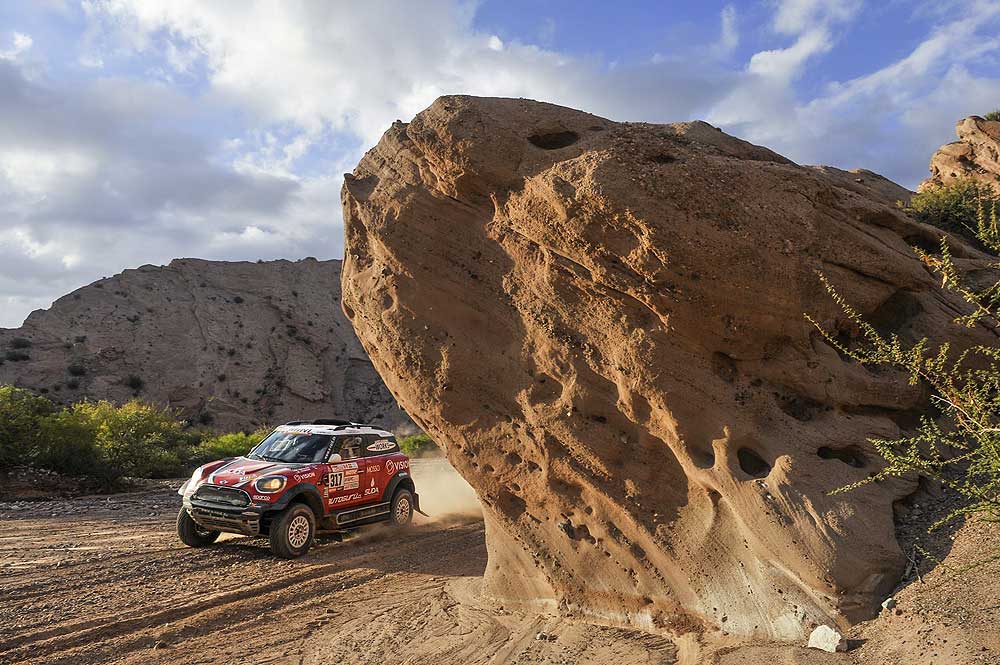 "It was a good day," said Terranova. "We tried to push for the whole race. We felt a good pace in the first section but towards the end of it, about 40km, one tire had a small puncture and I made a mistake – I decided to stop and fill it up. But then after 10km we had to stop again for the same tire and we lost maybe five minutes. It was the first day we felt we could push beyond the pace of the leaders and it felt good."

Mikko Hirvonen and co-driver Andreas Schulz in the Mini Buggy also put their mark on SS12 by quickly settling into 6th place for the greater part of the stage. Despite tiredness from having only a few hours’ sleep, the pair continued at a good pace to hold this position right to the finish of the stage.

"We had a pretty good day considering we rolled Wednesday and had a really long day – I only slept for two hours and now we’ve just had the longest special stage of the race," said the Finn. "We did pretty well and it wasn’t easy with the navigation either. Even though we were behind another car for 130km and lost a little time, I’m happy. The car was running perfectly. In some areas it was fantastic and I really enjoyed it."

The third crew of the Mini Family to take a top ten slot was that of Jakub Przygonski and co-driver Tom Colsoul. Their daily race ended with 8th place, just over two minutes behind their fellow Mini crew of Hirvonen / Schulz. This result saw Przygonski maintain his 6th place in the overall race classification.

"This was a really long special stage, there were a lot of rivers and hard navigation," reported Przygonski. "The early parts were like a WRC stage, which was nice. We were really pushing, going sideways and enjoying the time. But then, at one place, we made a really big mistake; we couldn’t turn and we jumped downwards from the rock. We landed in a good place, without any stones between some rocks below. It was a risky moment for us. We were on the limit. But we are here!"

Boris Garafulic and co-driver Filipe Palmeiro completed the stage 13th. This result meant the pair moved up two more positions in the overall classification to 16th.