Toyota Gazoo´s Giniel de Villiers, Nasser Saleh Al-Attiyah and Bernhard Ten Brinke safely negotiated the second loop stage through the treacherous dunes around Pisco and reached the night halt in fourth, eighth and 11th overall. De Villiers, winner of the event in 2009, carded a time of 03:04:17 hours with co-driver Dirk von Zitzewitz to secure the fourth fastest time in his revised Toyota Hilux.

"It was a tough day, like we expected, especially the first 70km in the dunes," said De Villiers. "They were really difficult and it was not easy with the navigation. We had three places where we had to turn around and look for the (way) point. It’s really tricky. Other than that we tried not to take too many big risks. It was quite dangerous out there. You get into a nice rhythm and then there is something that can catch you out. The car ran well."

Al-Attiyah and navigator Matthieu Baumel opened the road for their rivals and that placed added responsibility on Baumel’s shoulders to get the navigation right. The Qatari carded the eighth fastest time after his navigator suffered a bout of sickness in the dunes. "It was not easy. We opened all day. The reason we lose a lot of time is because Matthieu got sick from the beginning and I had to take care about him. But we finished the stage. We know we lose a lot of time. Tomorrow, we know, will be better. We will see." 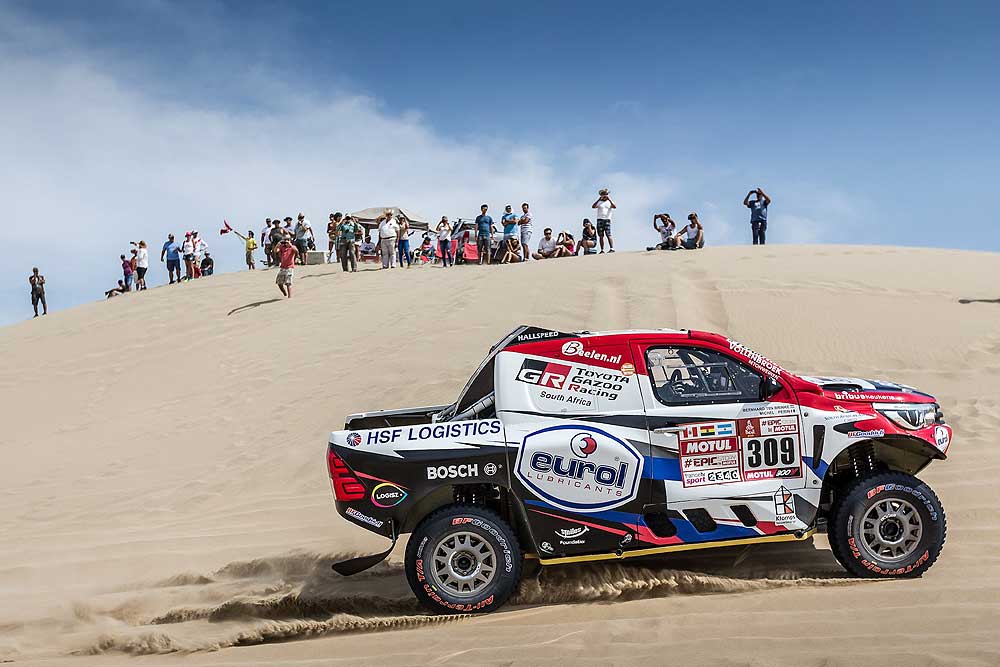 Bernhard Ten Brinke shadowed Al-Attiyah into the special and he and co-driver Michel Périn finished in 11th position. Tomorrow, the route of the Dakar heads south from Pisco to the town of San Juan de Marcona. The stage starts at the town of Ica along the Pacific Coast after a liaison of 208km and winds its way through canyons and dunes, skirting the famous UNESCO world heritage town of Nasca, to finish in San Juan de Marcona.

Bernhard Ten Brinke said: "It was quite a nice stage. We drive easy and at our own speed and manage our pace well. We just got stuck for three or four minutes and lose more than four minutes looking for the good way. Until now, it looks like a good Dakar with plenty of dunes."