The curtains were raised on the new look 2018 "Coral Coast Helicopter Services Gascoyne Dash" held in Carnarvon, Western Australia over Easter. The event boasted an exciting new point to point off road race format, which bolstered the entries to 28 cars and 61 moto’s. Stretching 202km east from the coastal town of Carnarvon to the iconic Gascoyne Junction, the teams rolled out the swags overnight and soaked up the local hospitality, before turning about face and blasting back to the coast on Sunday. 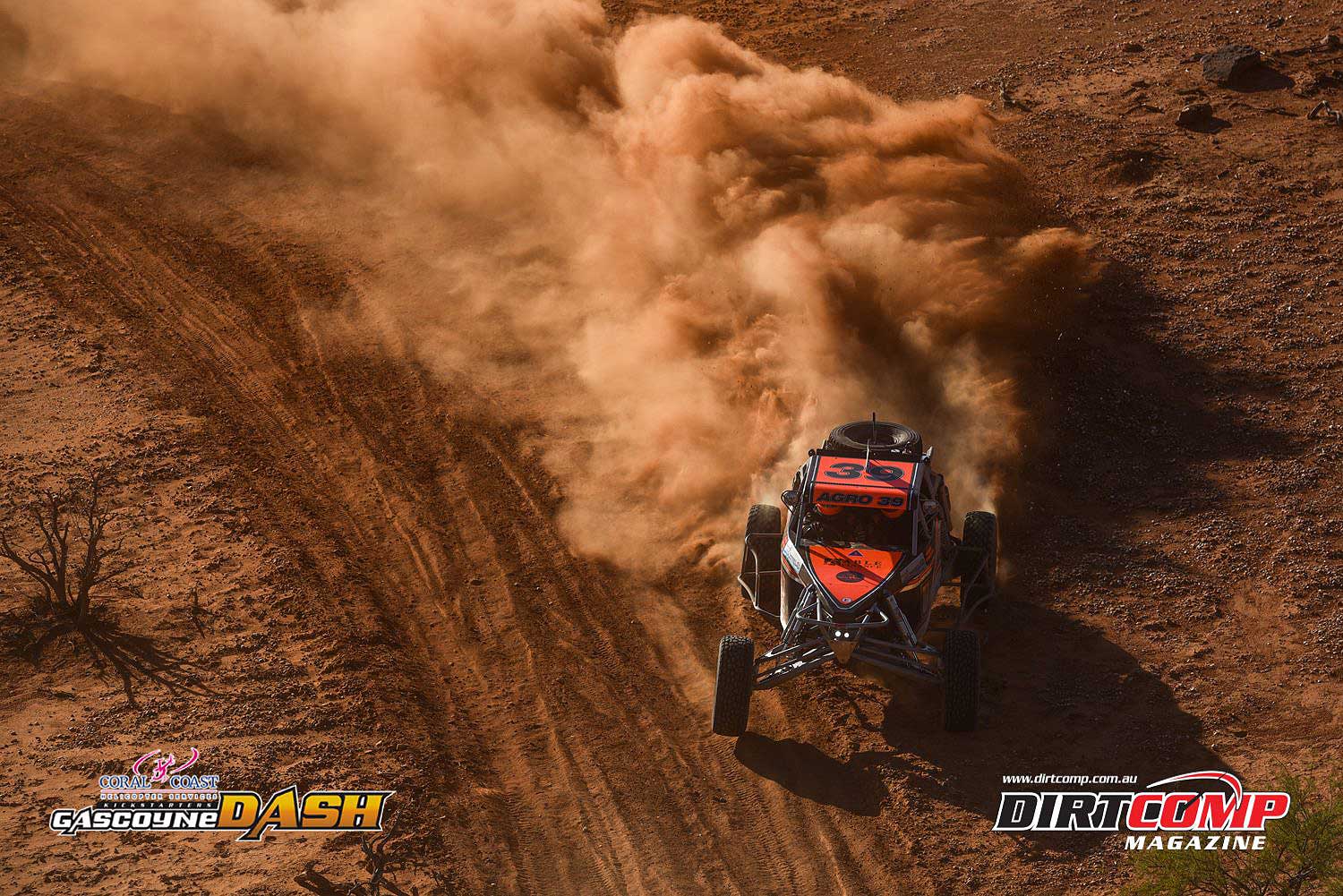 "It’s something the committee has been considering for almost 10 years. The GasDash had downsized over the last few years and we had just been doing some lap races locally. To kick it back in to gear we needed to do something different and we think the point to point format was the way to go." Said Ted Schultz, President of the Gascoyne Off Road Racing Club.

"It brings the towns of Carnarvon and Gascoyne Junction together, and there are the upsides of an excellent tarmac service road between the centres and mobile communication at the Junction. It’s all come together and the concept has been well received by the locals and competitors alike."

On the track Carnarvon local, Cody Upton was a man on a mission from the outset, holding the throttle wide open on his #2 Honda all weekend. Upton stamped his authority on the Moto division on Good Friday, winning the prologue by a huge 50 second margin on the 20km track run out of the Carnarvon Speedway.

The trend continued on Saturdays first section, with Upton building a 7:23 minutes lead. With the "King of the River" title firmly in his sights Cody Upton picked up where he left off on Sunday morning. In an inspired performance Upton shaved 1:20 mins off his day one leg time to seal the outright moto and E2 Class win at the 2018 Coral Coast Helicopter Services Gascoyne Dash in an overall time of 04:09:45 hours.

Upton also came out on top in the friendly rivalry between the bikes and the cars for the "King of the River" title. Coming out on top of the #44 Jimco buggy of Shane and Curt Elphinestone by 7 minutes. Upton dedicated the win to his mate and two time GasDash winner, the late Daymon Stokie in an emotional speech at last the presentation dinner.

Behind Upton, #255 Andy Brack and #737 Stephen Mitchell fought out their own battle for the minor outright placings. Gaining the upper hand on the race from Carnarvon to the Junction on Saturday, Brack started second on the road for Sundays race back to the coast. Brack pushed his Husky hard to open up his lead over Mitchell and greeted the chequered flag in 04:24:06 hours to take second outright, 5min ahead of Mitchell who would claim third outright for the second year running for Yamaha. Both riders efforts were rewarded with their respective class wins, Brack taking the E3 honours ahead of #501 Glen Taylor and #485 Lachlan Roberts, while Mitchell conquered the Masters Class with #122 Rob Pollard in second and #98 Steve Cooney in third. 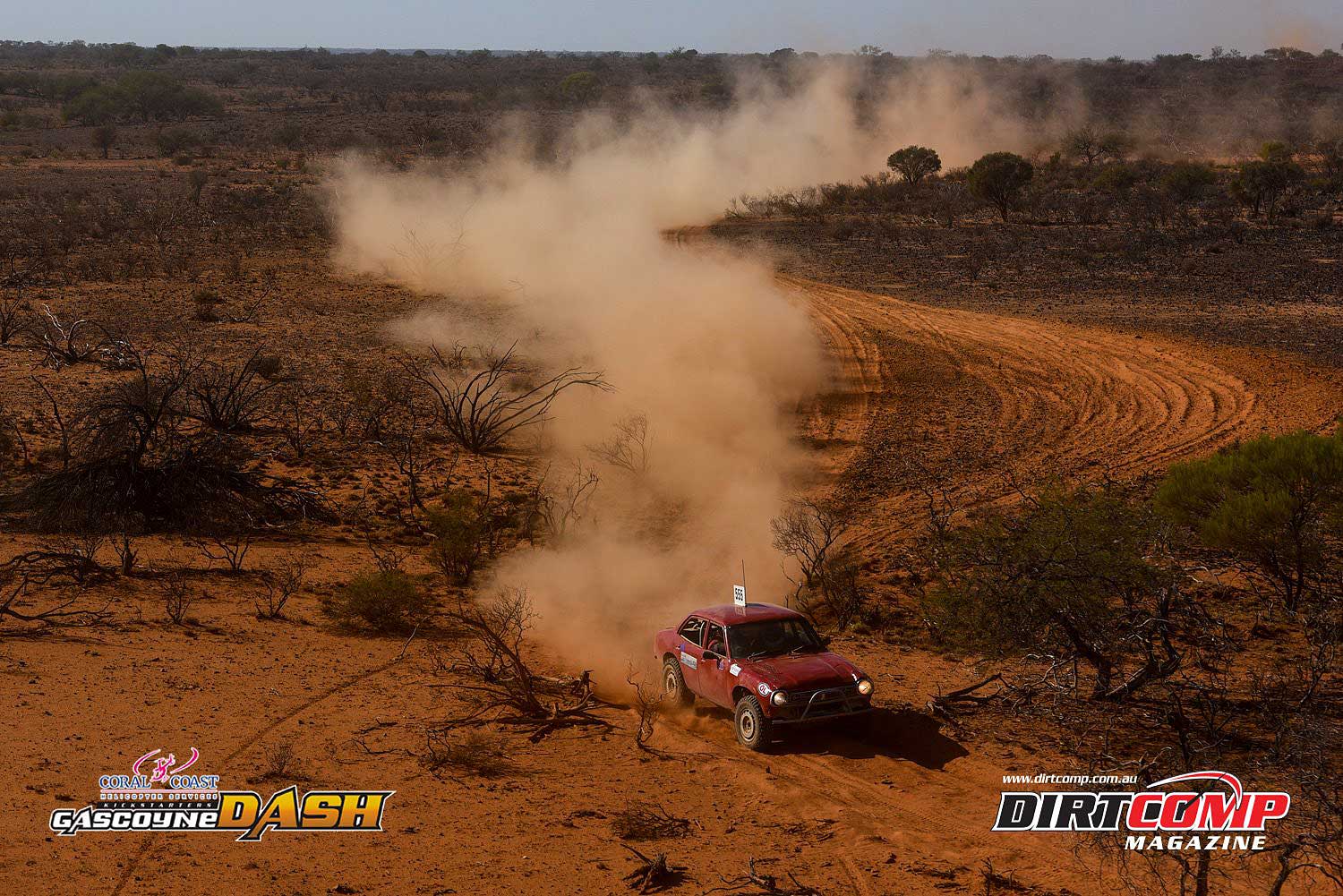 Through the remaining moto classes, #127 Jai Cosgriff walked away with the E1 win. While #627 Stewart Winsor set up the Veterans Class win with a 15min gap to his nearest rival on day one, allowing him to cruise back to the coast on day two. #540 Dennis Earle came close to matching Winsor’s pace on the run home, but had to settle for second in class ahead of #78 Brendan Moyce.

In the Quad division, #121 Brad Smith started day two with a slender lead over #989 Dylan Richards. However a low speed crash, followed by a mechanical failure ended Smith’s race opening the door for Richards to take his first GasDash Quad Class victory. #971 Dale Harris rode his way to second in class, ahead of GasDash regular #929 Logan Trigg in third.

In Good Friday’s Prologue the stage was set for a titanic battle over the next two days in the Auto division with #39 Darren Agrela securing pole position ahead of #44 Shane Elphinestone and the 2017 winner, #19 Troy Schoen. In section one, Shane and Curt Elphinestone kept their noses clean in the #44 Probuggy to arrive in Gascoyne Junction with a comfortable lead. While Agrela and Schoen both slipped back through the field with flat tyres.

After putting in the ground work, Shane and Curt Elphinstone extended their lead as they headed east in the #44 Jimco on Sunday morning. Opening the taps on the twin turbo V6 on the big desert straights, threading it over the red desert dunes and through the rocks on the return 202km leg from Gascoyne Junction back to the coast. Finishing with an overall time of 04:16:46 hours to claim their second outright win at the Dash.

Starting fourth on the road on Day 2, Darren Agrela and Ryan Barton quickly stepped into second in the #39 Jimco, when #6627 Mark Wainright rolled his Yamaha YXZ 1000R early on day two. Charging hard he made up much of the lost time and locked in second outright when he crossed the finish line in Carnarvon, 17min 17sec behind Elphinstone. 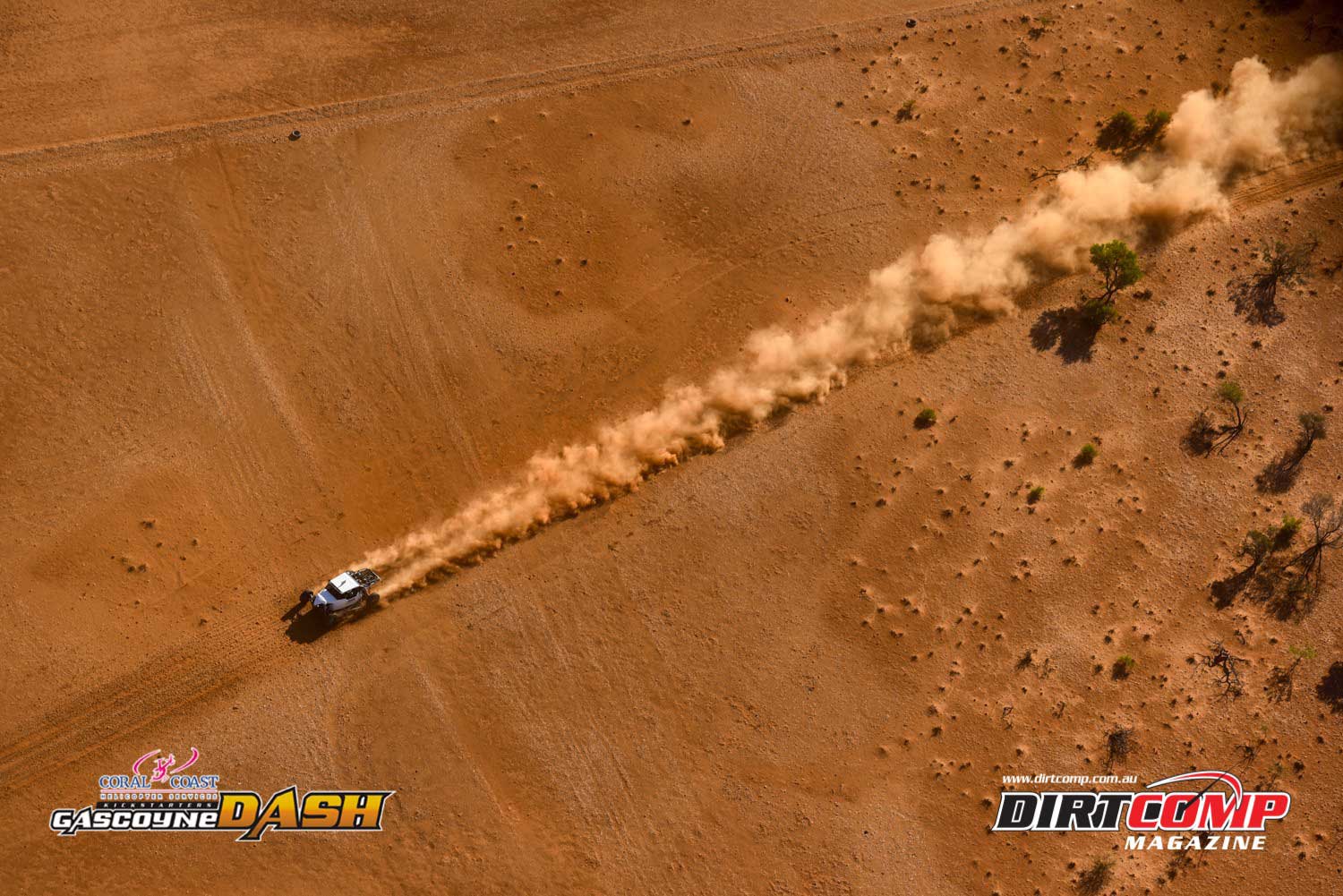 Jared Percival and Darryn Beckett in the #19 SS Racetech Prolite put a big ‘moment’ on Day one behind them and reeled in their class mate, #1711 Mal Yeardley who lost time trackside with alternator issues on the home run to Carnarvon. Percival’s clean run was rewarded with the Prolite Class win and third outright in an overall time of 04:49:23 hours. After a bump start by Mitch Davies, Mal Yeardley and his navigator Stephen Ketteridge Hall would complete the race in fifth outright and second in class. #195 George Metaxas and Cole Trewella rounded out the Prolite podium, third in class and 10th outright.

In a class often dominated by trucks, Colin and Peter Doney piloted the #406 Baja on steroids home to the Extreme 2wd Class win and fourth outright. Ahead of second in class, Geraldton’s Greg Pickersgill and Greg Finlay in the #425 Chevy Silverado, who lost time on day one with a flat tyre. Third in the Extreme 2wd Class was Carnarvon locals, Darryl Hardman & Bob Smith in the #428 Protruck.

Mitchell and Owen Davies were the sole survivors amongst the Extreme 4WD’s, taking the class win and sixth outright, despite losing third gear on the race to the Junction in their tubeframed #848 Nissan Navara. Nick Van Geest and James Eames held the upper hand in the #832 Patrol by almost two minutes heading into day two, but brake issues needed his assault on Sunday, leaving them second in class, ahead of #866 Mark Murray & Jim Ingham who also had a testing weekend in third.

By comparison the Production 4wd class was a much closer affair. Travis Epis and Ash Hylander took charge on Saturday in the #788 Patrol, opening up a ten minute lead over the #736 Jeep of Darran and Barry Shultz. However on Sunday, Shultz was hot on the heels of Epis as the charged towards Carnarvon through the stunning Gascoyne scenery, but they were unable to claw any time back off the Nissan leaving them in second, behind the class winners Epis and Hylander in 7th outright. Sticking to their own game plan, #748 Gary Kirkwood and David Michelmore finished third in class and 15th outright.

As the sole finishers in the SXS turbo class, #658 Michael Ware and Robert Ansingh took a comfortable win in a time of 05:47:28 hours, with Chris Unstead and Nick Scolaro suffering two flat tyres on the #674 CanAm on the race East which resulted in a DNF on section one. The crew repaired the SXS overnight and they were the quickest SXS home, leaving the team wondering what might have been. 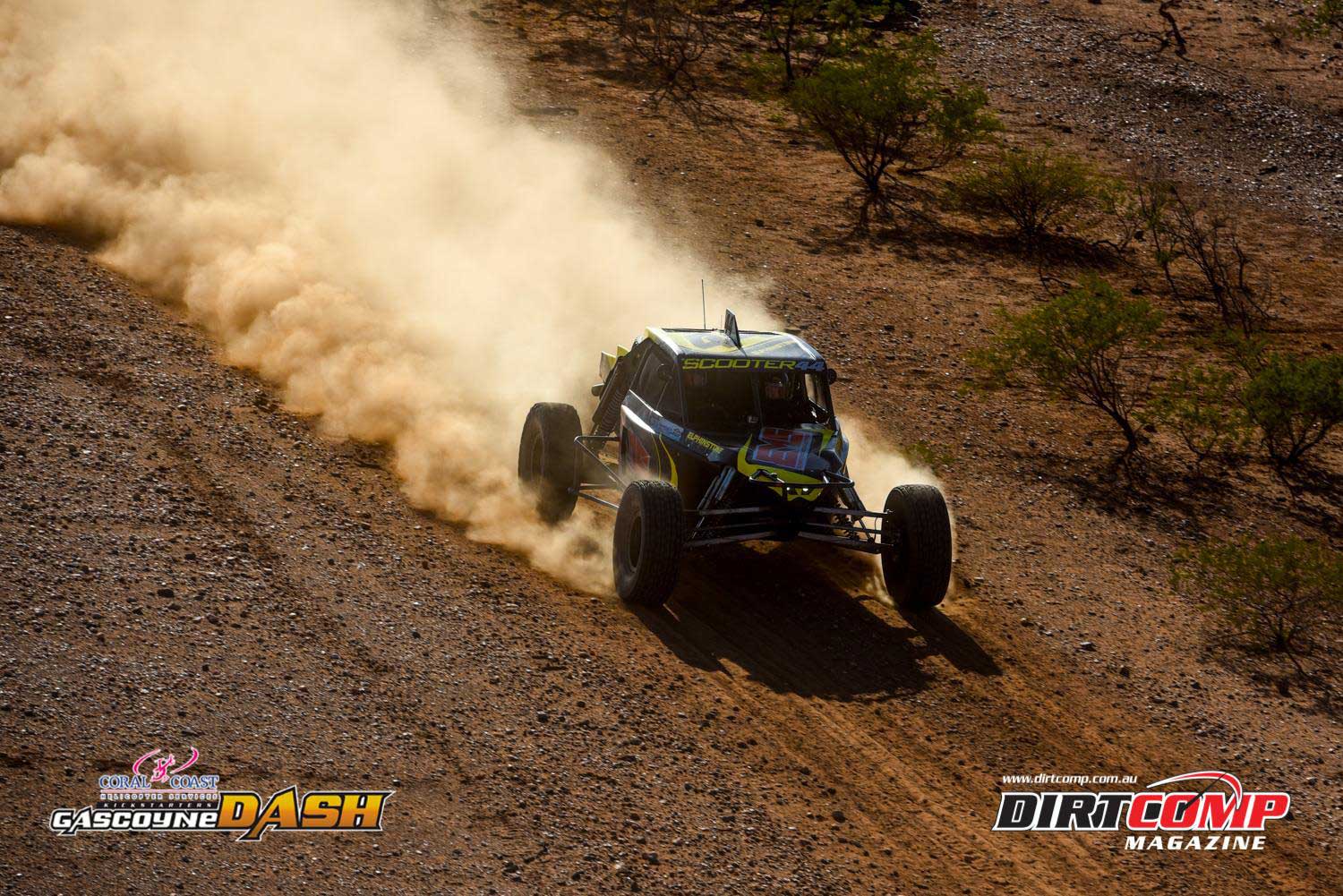 The naturally aspirated SXS Sport team of #6627 Mark Wainwright and Kev Dimsdale, were in the same boat. Putting in a giant killing performance to be second outright in their Yamaha on Saturday, only to roll in the early stages of Sundays return leg and DNF the event. Michael Davis and Kerry Yaxley were another team to rejoin the race for Sunday’s leg, bringing their #234 Super1650 home to tie up the class honours.

Deon Visagie drove his single seat #1010 Sportlite Buggy to a comfortable class win and 13th outright. WAORC Sponsor, Peter Barrett and Gabbi Bamford had a testing weekend in the #1032 Carnarvon Motel buggy, with clutch issues during the prologue, then losing a nut off the upright on the leg to the Junction. However they came home in flying colours, posting a 02:35:12 hours time, putting a smile back on their faces.

The Performance 2wd Category was stocked with two West Australian Junior Development Series cars, both of which negotiated the challenging 404 competitive kilometres successfully. The 40 year old #555 Mitsubishi was only completed just in time to load on the truck in Perth and make scrutineering on Thursday afternoon. In the hands of Fluffy Fahey and Russ Cullen and navigated by Sean Beck, the huge effort to prepare the #555 car was rewarded with the class win.

The #583 WAOJDP Kingswood was once again crewed by the son and father team of Mathew and Jeremy Beck at the GasDash. Power steering issues hampered the teams campaign, but Mathew muscled the Holden home in a character building performance to take second in class and 17th outright. Echoing the GasDash’s motto that "winning is something, finishing is everything."

The incident free event saw 46 motos and 17 cars complete the 404km race distance. Buoyed by the positive feedback on the new point to point desert race format, the Gascoyne Off Road Racing Club is looking forward to building on the success of this landmark year in the events history, with an even bigger event in 2019. 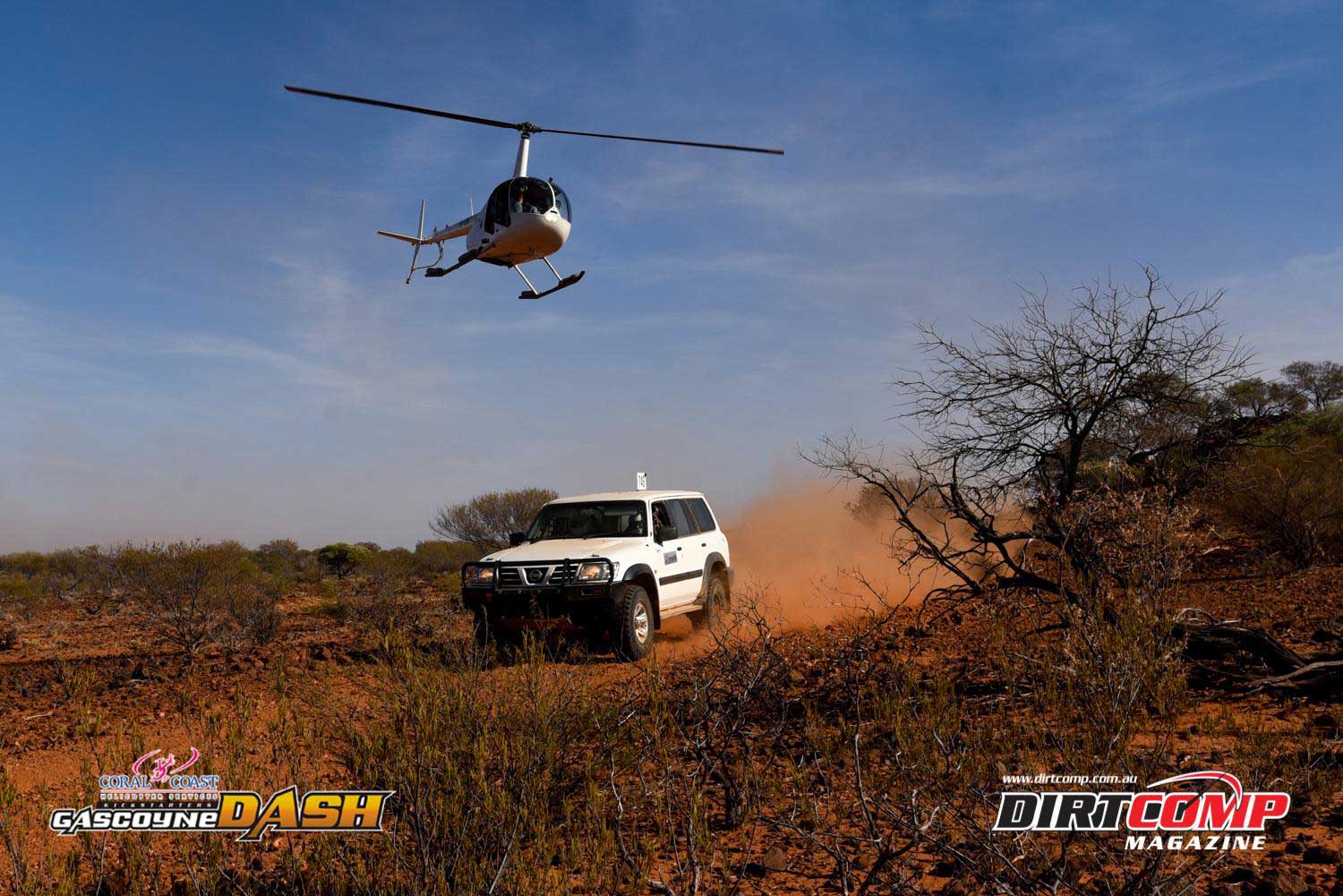 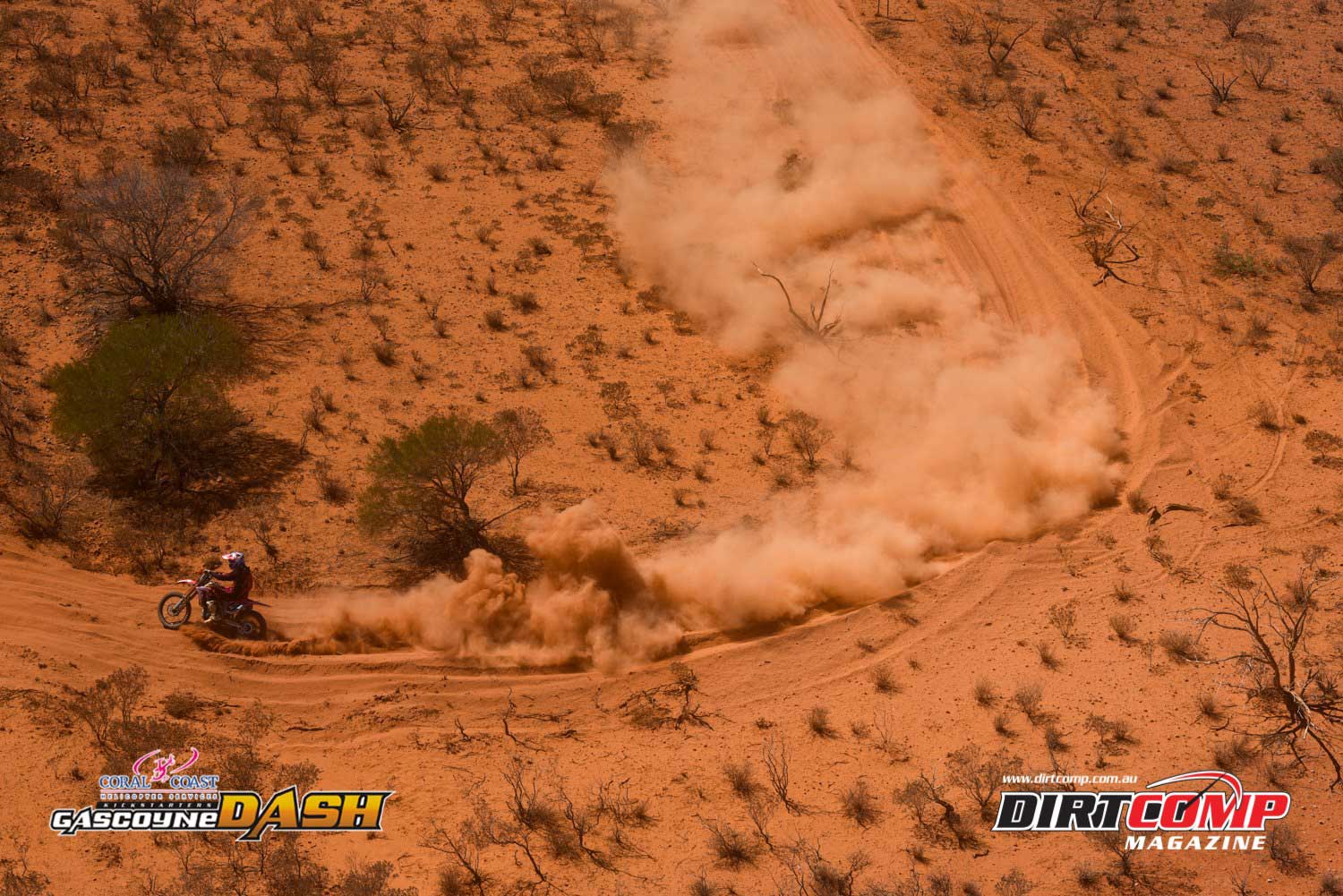