Long days, high temperatures and tricky stages await the participants in the 2018 "Maruti Suzuki Desert Storm" Rallyraid in India, which will be held from March 17-23. True to the spirit of rally-raids, finding long stages that push the men and their machines to the limit in the face of rapid urbanisation remains a big challenge for Northern Motorsports, the organisers of the Desert Storm. 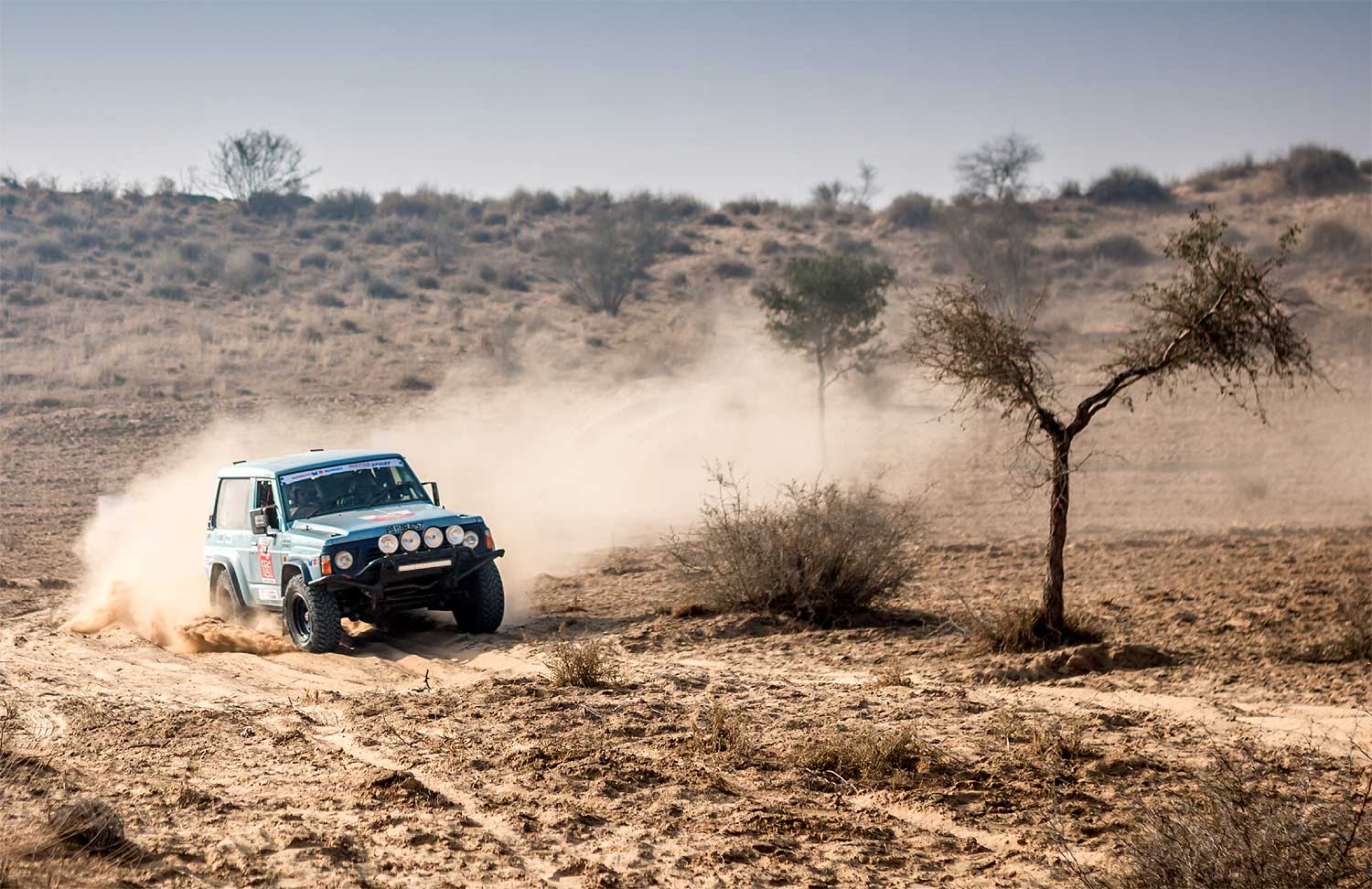 In order to give the competitors adequate racing distance to qualify as a legitimate rally-raid event that’s inscribed in the FIA calendar, the core team on Northern Motorsports relies on local knowledge and in-house expertise to scout for new tracks in the heart of the Thar Desert in Rajasthan. This year, the participants in the Xtreme and Moto categories will have to deal with several long stages with ever-changing terrain and varying density of sand. In a welcome change, this year the rally will be much compact with the stages looping around Bikaner and Jaisalmer.

"For this year’s Desert Storm we have found some virgin tracks that will be used for the first time in the rally," said Raj Kapoor, co-founder of Northern Motorsports. "Some sections of the specials will be a challenge for the competitors, especially the participants in the Xtreme category. In places the sand is very soft, where the drivers would need to be on the top of their skills to negotiate the tricky stages. If they get stuck, it will cost them plenty of time."

The 2018 Maruti Suzuki Desert Storm will be relentless, hardly giving the participants much time to recover. Apart from the long days and stages, they will have to deal with ambient temperatures shooting up to 40 degrees in the desert during the afternoons. It means, the temperatures inside the cars will be in the range of 50 degrees. The participants in both the Xtreme and Moto categories would be required to pay special attention to keep themselves well hydrated.

The rally cavalcade will depart from the Great India Mall in Noida for Bikaner after the ceremonial start. They will have to tackle liaison of over 500 km even before they check into the time control of the first special.

Keeping in mind the long liaison overnight, the first leg of the rally will be a relatively short affair. The two special stages on the day’s agenda comprising a total distance of 70 km will set the mood for the next few days. On this day, the participants need to be careful on the fast grit and gravel tracks because they won’t have not much to gain but plenty to lose, should things go wrong. 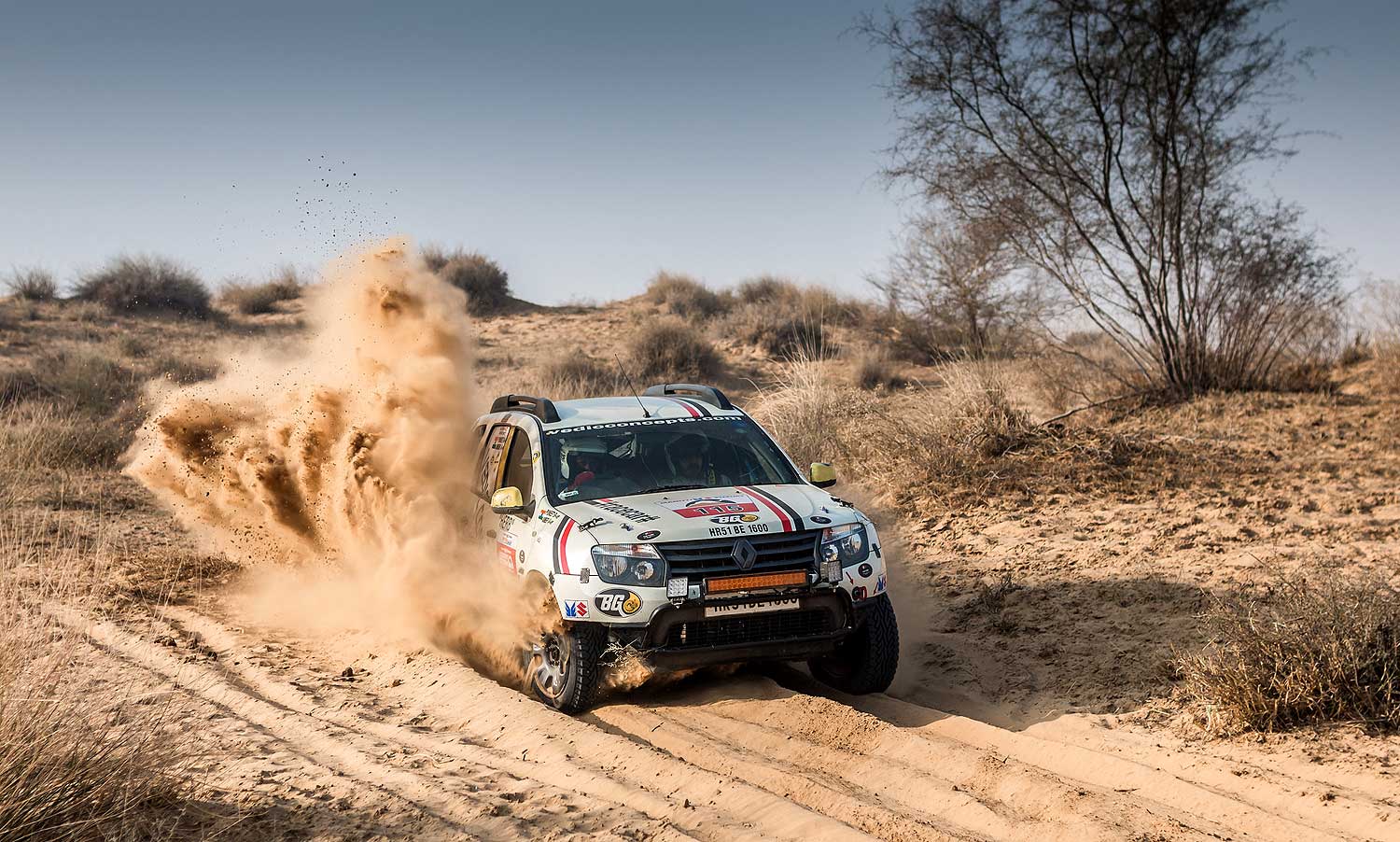 This leg will mark the start of serious business in the run up to the longer days and specials. The two stages totalling a competitive distance of 130 km will call for steady focus on the part of the drivers and riders. The challenge on this day will be negotiating the narrow and twisty tracks lined with camel grass and thorny scrub vegetation. The track surface will also change as the participants edge closer to Jaisalmer. At this point the positions will be nicely set up for the big charge in the next stage.

On this day, the competitors will be tasked with tackling the longest stage of the rally, measuring close to 200 km. To make things more interesting, the stage will run through the dune country around Sam. Past experience shows that the starting positions have turned on its head in this sea of sand. The deceptively long and flowing sections abruptly turn into soft sand traps that suck in the tyres of the cars. If that’s not enough, the multiple camel cart tracks can quickly turn into a maze if the navigators lose their focus, which is a distinct possibility, given the heat and dehydrations that they have to deal with. It will take a lot of skill to negotiate the minefields on this stage.

If anybody thought that after tackling the longest stage of the rally in the previous leg the deed is done, they could be in for a lot of grief. The fourth leg of the rally will be the proverbial sting in the tail (tale). This leg has been divided into two parts A & B. Leg 4A, consisting SS6 & SS7, will combine to make up a total distance of 160 km. It will be take the rally into virgin areas, which pack in a lot of surprises. The drivers and riders would need to pay careful attention to the roadbook instruction because they would come upon plenty of whoops that can break the machines if not their spirit.

But the real fun lies in store in leg 4B, marking the eighth and ninth specials because it will be run in the night and in the reverse direction of the morning’s loop. The participants need to ensure good lights because the desert is a very different animal in the night. On this leg it’s expected that the stragglers will check into the last time control when the village rooster will be cocking its first doodle at the break of dawn.

After two intense days, the participants can breathe easy as they need to tackle a short 30 km stage to complete the rally. If the front runners can keep their cool, they will be able to enjoy the champagne shower and a hearty meal. 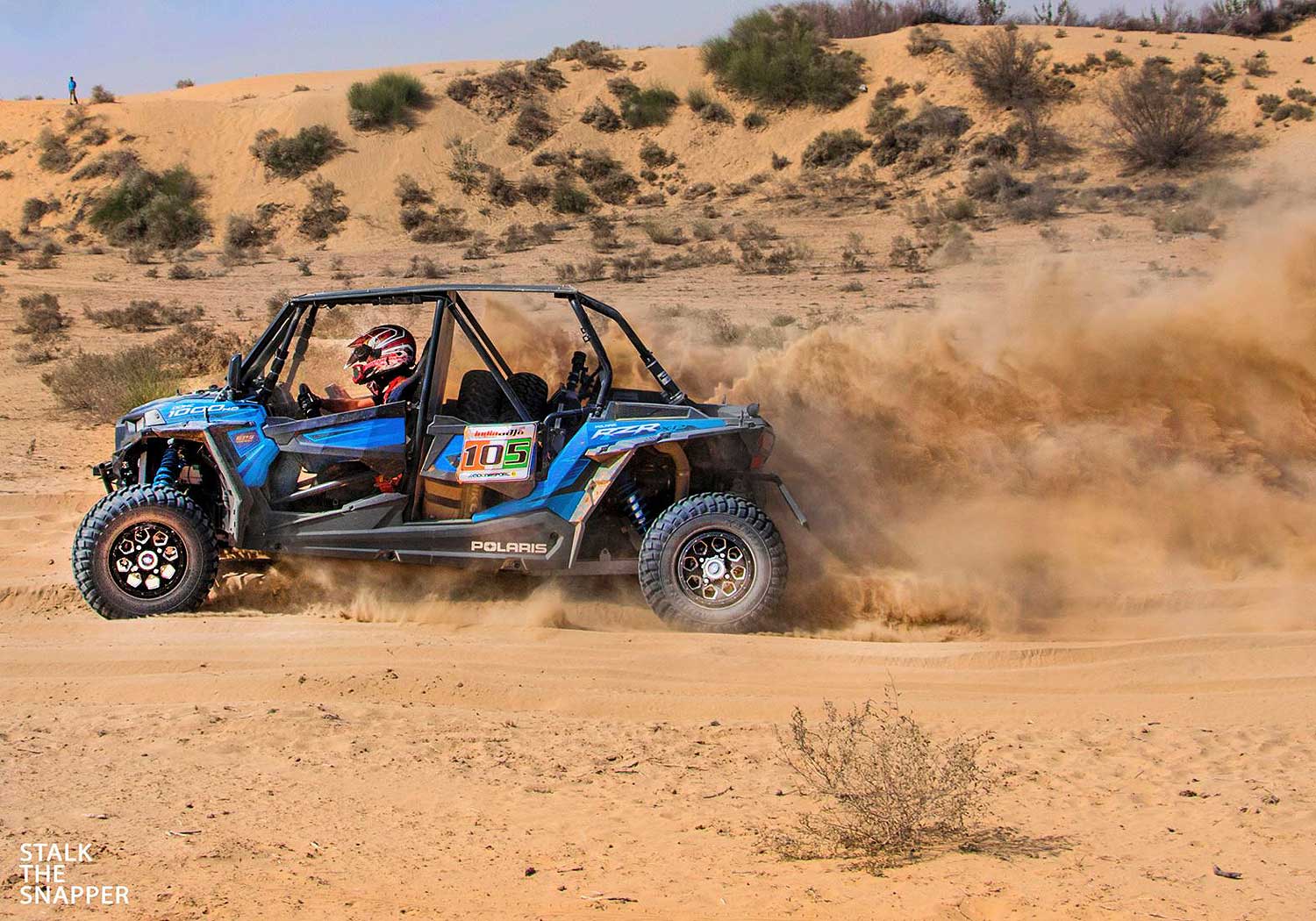 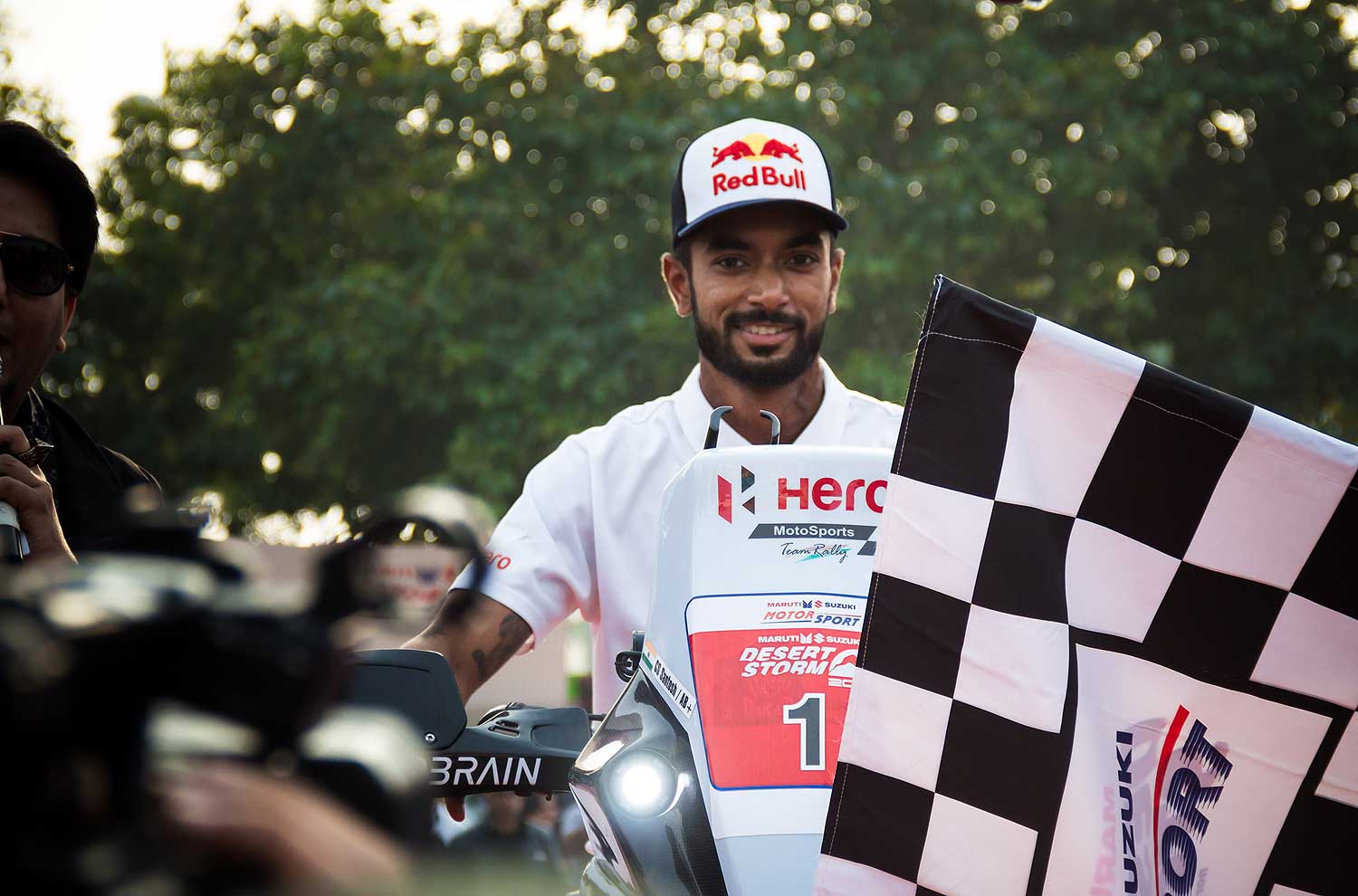 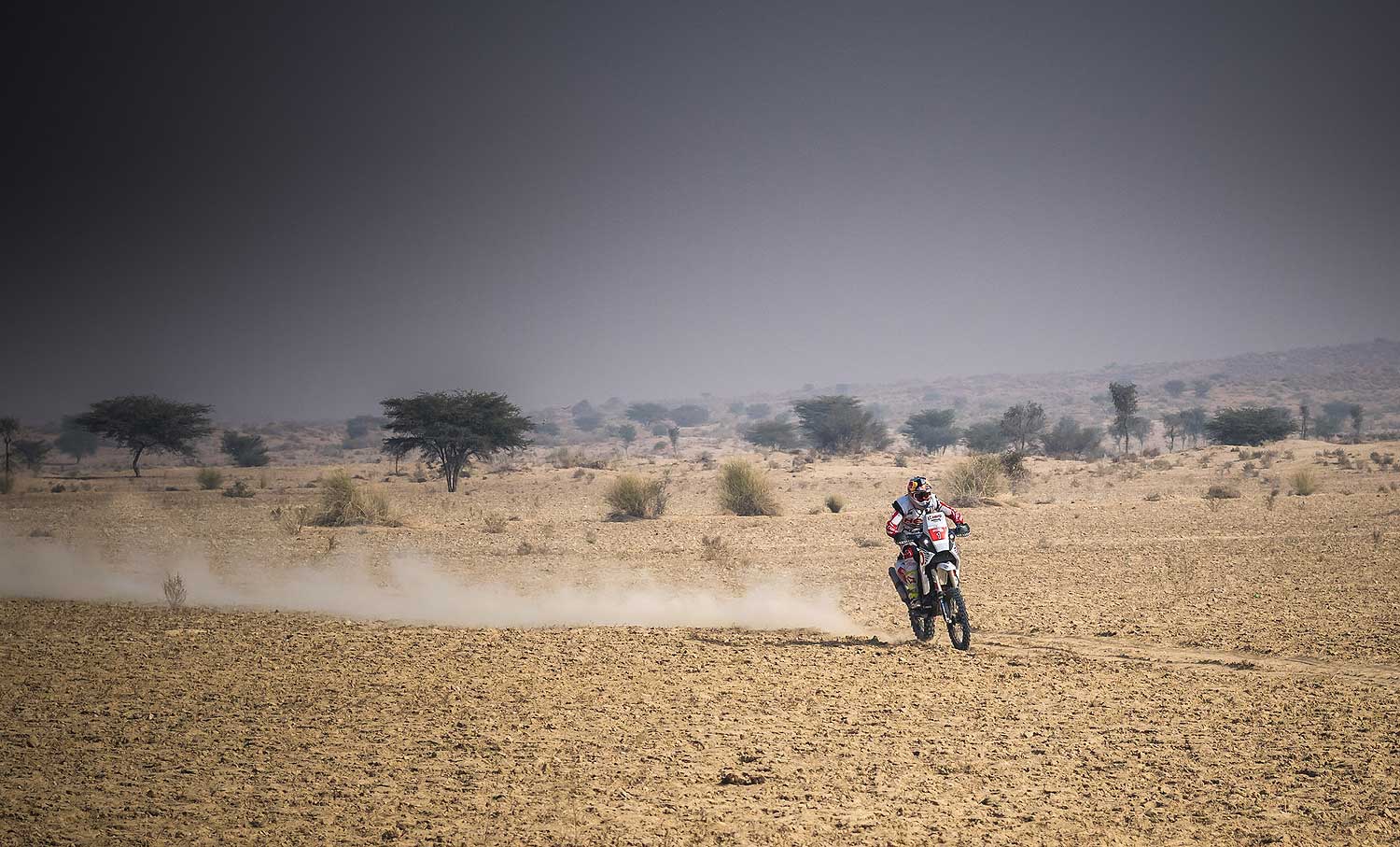