The first round of the "Fly-SAX Fly540 Kenyan National Rally Raid Championship" was always going to be a popular event. Many have spent the off-season tweeking old vehicles, buying new ones and some even got a re-spray. The event was held on the Loldaiga Ranch, one of the most stunning ranches in Kenya with hills, kopjes, forests and dry open ranges. The event was hosted by the Nanyuki Rally Group with the highly experienced Bimal Patel overseeing as Clerk of the Course. 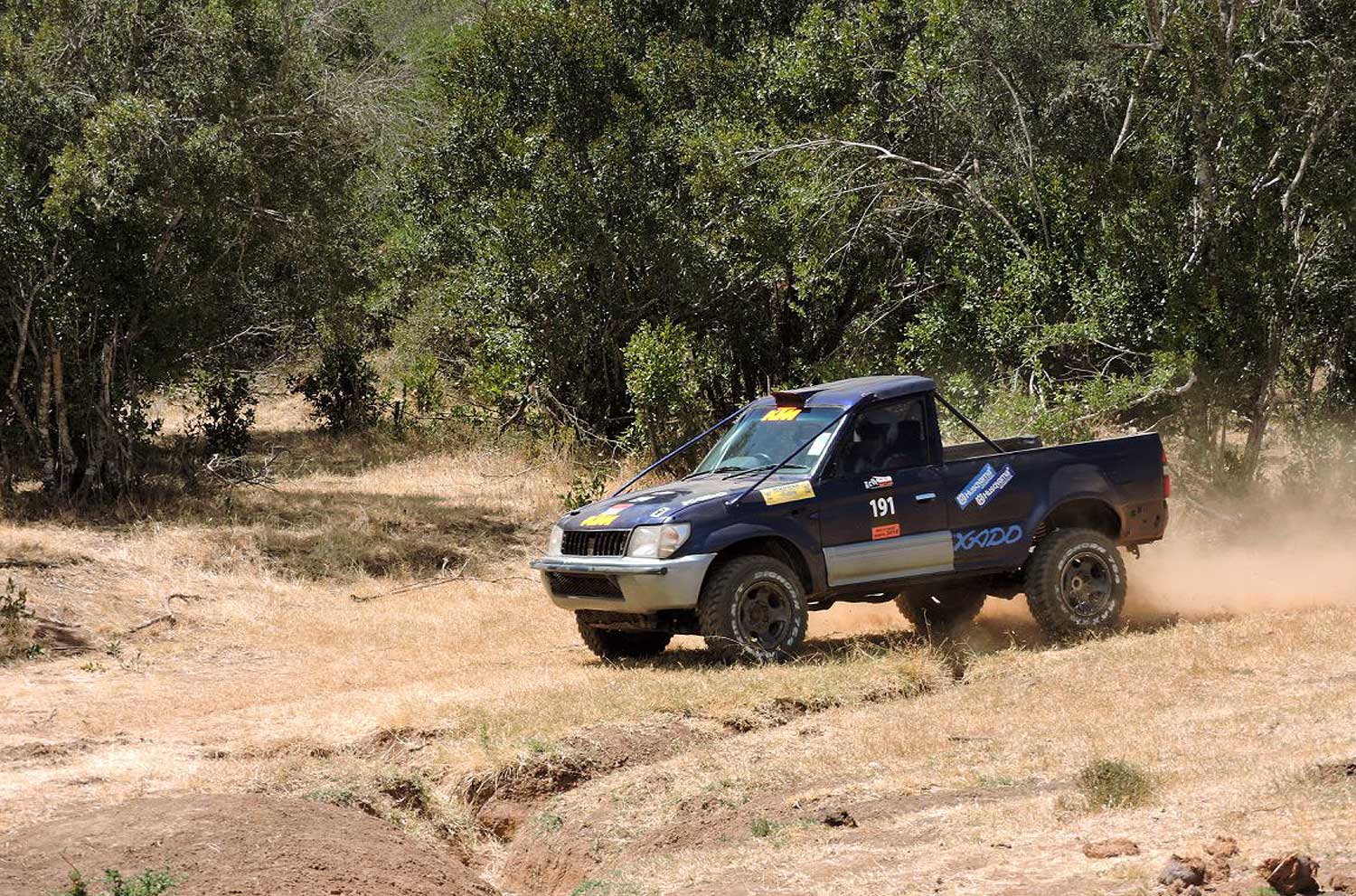 On day one, 2017 Championship winner Ross Field lead the pack away in his Centurion Racing CRT Prototype. He was in the unenviable position of not only making first tracks for navigation purposes but also he had to clear the road of stray game – and with the Loldaigas known for their high density of elephants this could be a challenging task.

He had a good measured run with his experience showing through, although he was caught in the later sections by Carl "Flash" Tundo in his howling BMW M3 engine Milner R4. Tundo overtook Ross to roar into the final control only a few seconds ahead on the road, although over two minutes faster on the clocks with a time of 43:03 minutes. Ian Duncan pulled out the stops and was only 1:18 minutes behind in his Toyota Land Cruiser Diesel – and was leader of the Modified Car Class. Shivam Vinayak was leading in the Bikes.

It appeared that Mark Glen and Patrick Garner had a different strategy from the start – they hit the ground running and threw down a marker to all the competitors setting fastest time by 30 seconds in another CRT Prototype. After a disappointing 2017 season this was the perfect way for them to start.

In 6th Overall was Joost Zuurbier, before the event he had to revert to his smaller turbo after damaging his "2018 super turbine" in testing – although with a CRT only a minute ahead he was seen pacing around the bivouac muttering that it is time to turn up the boost. He was expected to be on the pace on day 2.

The event saw a number of Rhino Charge cars brought out to race, leading them was Jon Bovard and Grey Cullen in Bovard’s battered rhino charge car (they had to attack the roof with a hammer to get through scrutineering). The pair had hoped to debut their new car – known affectionately as the "toad" - an AMG V8 powered Ultra4 style car, however gearbox gremlins kept it behind in the workshop.

In its place, Bovard wheeled out his tough-loved modified Suzuki – as he has been so busy in the off-season building and fixing other people’s cars he had neglected his own, which was still sporting the scars of the multiple roll over on the last event when they slipped off the side of the Eburus. That evening he was almost in a state of shock at the way he was overtaken by Mark Glen and was talking about needing bravery pills to step up his pace on Sunday. 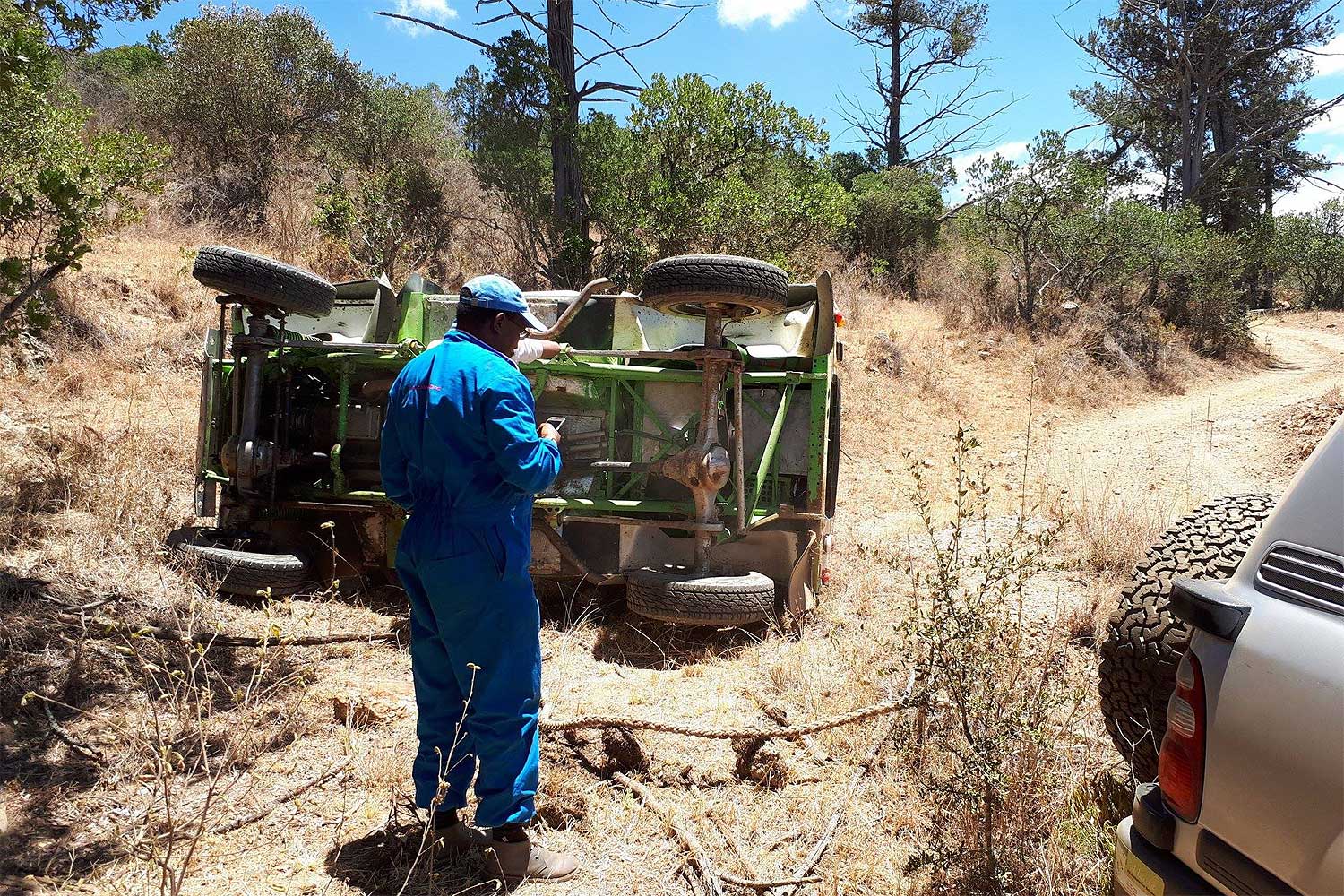 The bright yellow Tomcat of Justin McCarthy and Guy Keeble was going well, while it was Keeble’s first event in the hot seat – he worked out the navigation even though it took them some time to realise if Keeble wasn’t sitting on the GPS the signal would improve.

Multiple championship winner Nish Lakhani was not happy with his performance back down the field. He had recently undertaken considerable modifications to the rear suspension and chassis set up to his modified Land Rover special however the setup he was running didn’t suit his style  and without dismantling his FOX dampers there was little he could do. They had a scare early in the event with some big bangs and clanking in his car – only to realise it was an old discarded bolt bouncing around the inside the cab.

Long time competitor Rajesh Maini was making a welcome return to Rally Raid after focusing on Classic Rallying in his Escort in recent times.  Performance on the first leg was limited due to overheating which turned out to be a vapour-lock in the cooling system. Alasdair Keith and Dr Raj Jutley both had fuel problems which dropped them down the table – we are expecting them to be charging on Leg 2 and 3.

First time competitor Raaji Bharij had an entertaining time in his hire car, being navigated by the owner Geoff Mayes; they had a couple of engine fires and had to return to the bivouac on a tow rope. Up until they retired, Geoff could not believe how fast Raaji was pushing his car – when we next see Geoff behind the wheel there could be some new tweaks to his driving style.

Bringing up the rear were John Rogers and Ameet Matharu, who were on great form in the bivouac that evening. With their new car, they had completed the Leg without problem (a first in their rally raid history) which allowed them to work well as a team – unfortunately due to a GPS setting problem, they wrong slotted 4km from the end resulting in a 20km detour – John looked slightly lost that evening with nothing to fix on the car and so headed off to watch the Rugby.

After a cold night, the sun welcomed in Day 2 which comprise of a 84km route which was to be repeated twice with 25 minute refueling stop. As current leaders, Mark Glen and Patrick Garner were to lead the field away knowing if they made any navigational errors, Carl "Flash" Tundo would be waiting in the wings ready to pounce. Their nerves were further stretched when the ambulance safety teams turned up late, leaving them waiting on the start line ready to go. Finally they set fastest time on Leg 2, with Tundo chasing them hard – he just started to catch their dust when around 4km from the end of the leg his suspension failed and he had to retire. 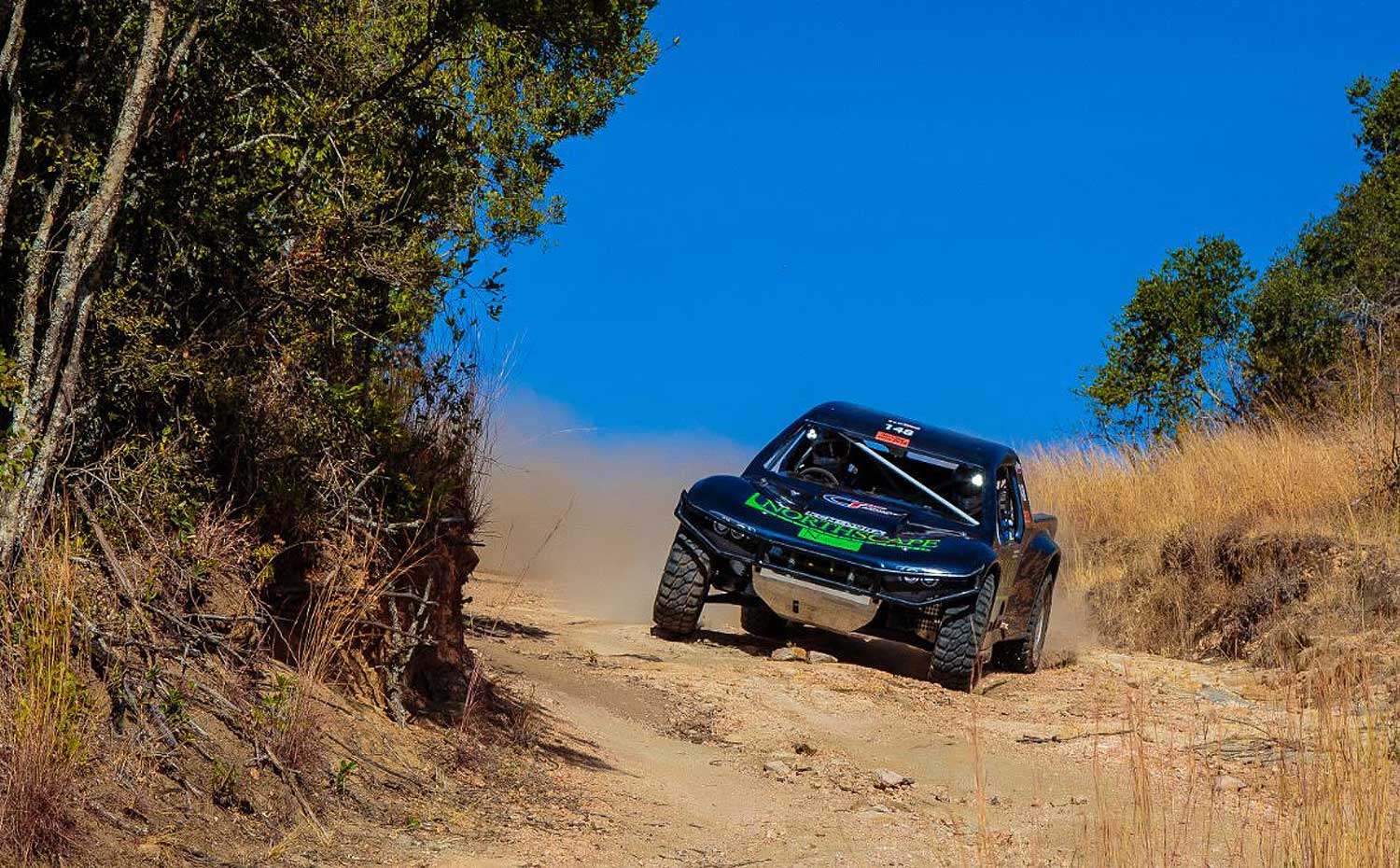 Ian Duncan was pushing the Milner and CRTs - showing them what could be done in a Diesel-Toyota, unfortunately his turbo didn´t like that and forced them to stop mid-way around Leg 2.

Biker Shivam Vinayak performed well on his new KTM and won the bike class and rounding off the podium with third overall. In the Bike class, Danilo Pacci and Robbie Calder had a tight race for 2nd and 3rd  spot. After Leg 1 Calder was in the lead, although on Leg 2 Pacci snatched it back with a time almost 6 minutes quicker. Robbie’s time was not helped when he stopped to move a tortoise off the route. On the final leg with no tortoises in need of rescue Robbie stopped the clock 3:20 ahead of his rival although his charge was too late and he finished third bike by 4 seconds.

Joost kept his pace consistent on the second day to come home 4th overall and first Modified Car ahead of Vincent Boulanger who seemed to have got the hang of his new car and set the third fastest time on Leg 3 – making it a 1-2-3 for Centurion CRT Prototypes on that leg.

Nish Lakhani was hampered by problems on Leg 2 including lack of brakes, it took some time for his mechanics to sort out the problem resulting in overrunning his service time which masked what would have been a good Leg 3.

Rajesh Maini set out well on Leg 2 (with the temperature gauge staying well away from 120 where it had sat during Leg 1), pushing hard up the steep hill he clipped a stump which resulted in a puncture which had to be changed in the main spectator area. Around 20km into the section a rear shock mount broke resulting in a bouncy ride. In service the mechanics did not have time to fix it and so he ran Leg 3 with only three shocks. On a fast section on the open range at the north of the farm a bump started a bounce which resulted in a spin – only to be stopped by a single termite mound. While the mound kept the car on all wheels, a tyre was ripped off, steering damaged and later it turned out the brakes lines ripped – the brakes finally gave up the ghost going through flying finish! Maini was satisfied to finish the event and score championship points.

John Rogers and Ameet Matharu swapped seats on Leg 2 with Matharu doing the driving and had a clean run without any problems. For Leg 3, they swapped back again unfortunately 10km from the start (again in the spectator area) the broke a steering arm which put gave them a bogie, although they did manage to score some Championship points.

Sarfaraz Yakub and Zishan Malk pushed hard but unfortunately on the Leg 3 they put their car on its side causing them to take a bogie. Umraj Sehmi in car 113 had a lucky escape, while climbing a very long steep hill they burnt out their clutch, and struggled to hold the car on the brakes, his navigator Ketan Kular jumped out to put a rock under the tyres however the brakes failed and Umraj only just managed to scramble out in time before their Range Rover Special disappeared and barrel-rolled into a ravine. Thankfully they both escaped without harm.

Competitors agreed that it had been a fantastic and challenging event and with Mark Glen as a newcomer to the podium, the championship is poised to be an exciting year ahead! Now in Kenya the rallyscene is looking forward to the next event at Naivasha on 28 / 29 April. 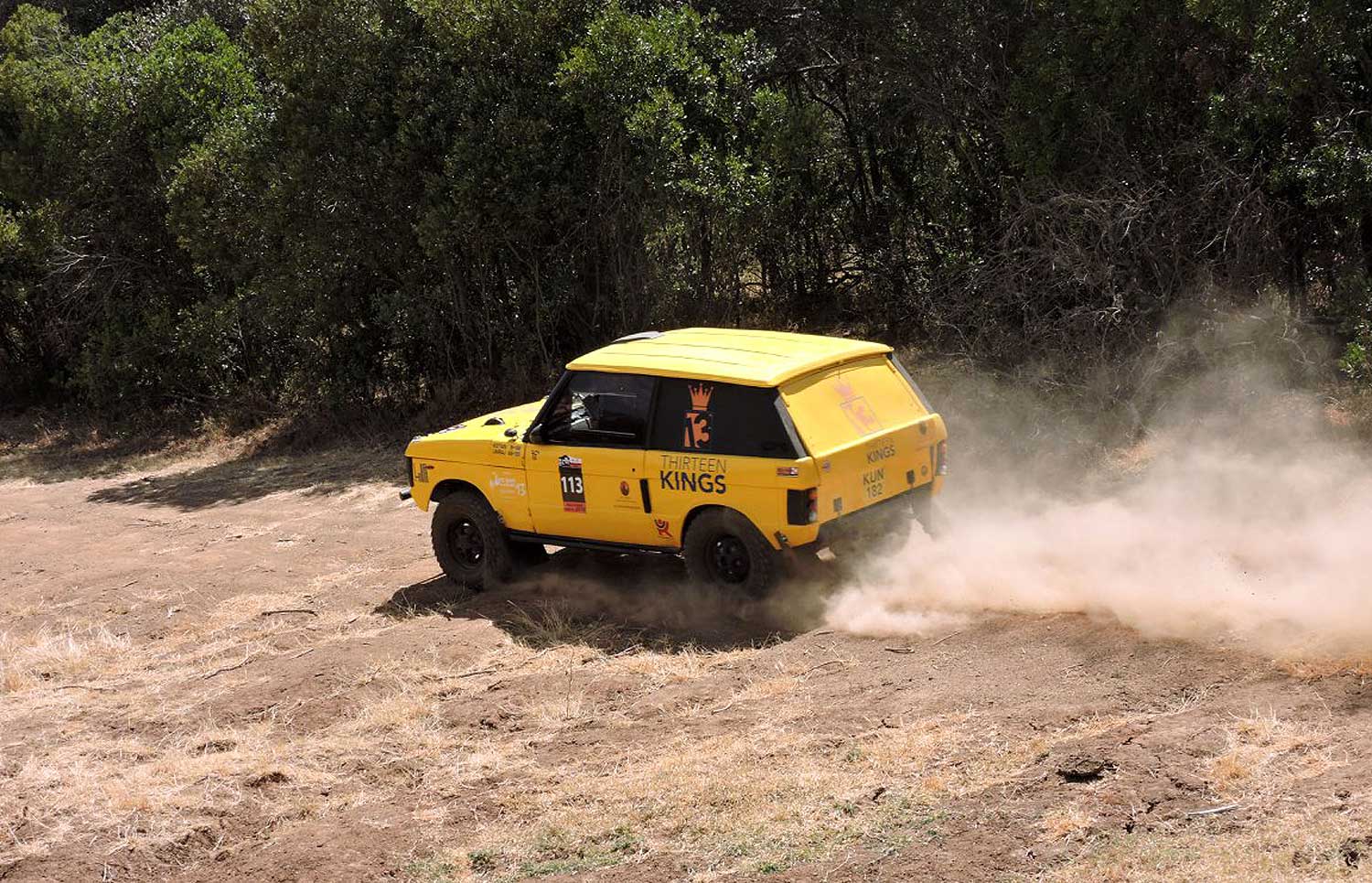