The 2018 Speed Energy Stadium Super Trucks World Championship (SST) kicked off last Saturday night (Jan.27th) with a return to the sold out Lake Elsinore Diamond Stadium in Lake Elsinore, California (USA). Fans in attendance witnessed one of the most entertaining and dramatic filled SST events in quite some time as Apdaly Lopez would claim the first SST victory of 2018 over Jeff Hoffman.

Fifth starting Apdaly Lopez of Tecate, Baja California (Mexico) is no stranger to the temporary off-road track the orga-crew built inside the Lake Elsinore Diamond Stadium. Lopez would dominate the opening round of competition in the SST Race and Rock World Championship Finals back in December, and would look to back that up in the opening round of 2018. 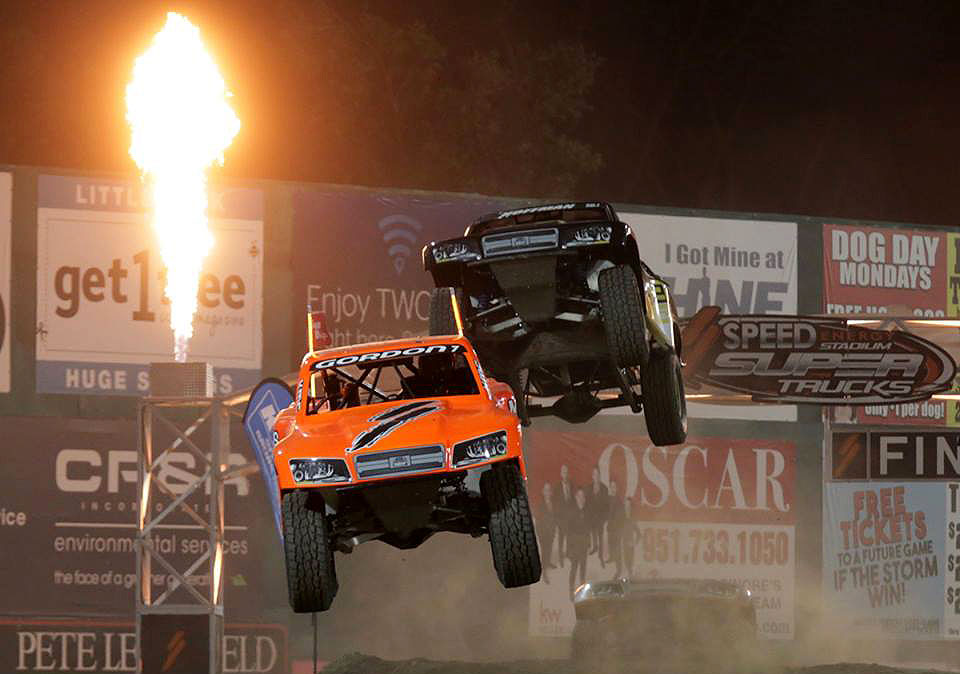 The start of the 16-lap main event would see the newest member of Team UFD Jeff Hoffman of Phoenix, Arizona jump out to an early lead on first time SST starter Cole Potts of Scottsdale, Arizona. The first lap would see action all over the track as potential race winners Sheldon Creed of El Cajon, California and Jerett Brooks of Alpine, California would become locked together dropping back in the field early in the event.

Robby Gordon of Orange, California driving the Speed Energy Toyo Tires truck would settle into the second position behind Hoffman on Lap-2, and would quickly challenge for the top position. Battling back and forth Hoffman would over drive the corner, and would allow Gordon to take the top spot, and drive out to a sizable lead.

Following in the tracks of the hard charging Gordon for multiple laps the truck of Hoffman would hit all his marks with accuracy, and would make up enough ground to come close enough to challenge Gordon back for the lead. Hoffman would pass Gordon for the lead in a daring move to the inside just before the competition caution would fly over the field. At the halfway mark Hoffman would lead Gordon, and Brooks who battled his way back thru the chaos into the top three after the early tangle in the event with Creed.

The restart would see Hoffman loose the handle of his truck in the first corner kicking it up on two wheels, the lurking Gordon would capitalize launching the No. 7 back into the lead. Dropping into the third position behind Hoffman would be Lopez who was battling thru the field after making early contact in the event with various competitors. At this point Lopez truck was showing signs of nothing short of war.

Driving like a man possessed Lopez would now set his sights on Gordon and the top spot. Finding just the right opening to drive his truck in extremely hard into the lower groove Lopez would work Gordon up the track to move past him in textbook dirt track racing fashion.

However, Hoffman would have something to say about that, as he would take his joker lap to catapult back into the lead ahead of Lopez all while Gordon would work his way back past Lopez for second. Just when you think things are working in the favor of the driver they call “The Hoff” his truck would stall in the middle of the corner dropping him back to the fifth position.

All while the red flag would wave stopping an incredible battle out front. Brooks driving in replacement for the injured Paul Morris would roll over his LIVE entry onto the side right in the path of on coming trucks. The restart would see Gordon get a good jump on the second place Lopez to break out to a four-truck advantage. 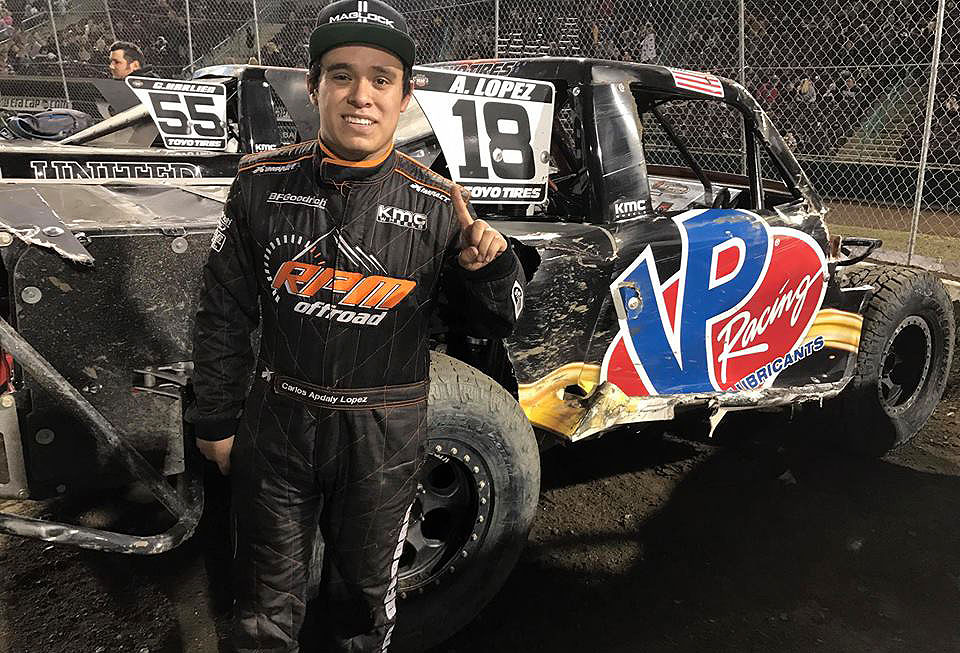 One lap later the red flag would once again come out for SST rookie Blade Hildebrand of Yucca Valley, California, as his Empire Destructive entry would go for a series of rolls going over the crossover jump. The young driver would remain in the truck and restart at the back of the field a true test of the durability and construction of these Stadium Super Trucks.

The closing laps would see Lopez drive extremely aggressive looking to charge to the front of the field making contact with Gordon multiple times and eventually moving past him. Hoffman lingering back in third place would want into that party as he would slide around the outside of both drivers to take the lead on the final lap. Lopez would battle back as Hoffman’s truck would stumble temporarily allowing Lopez to open up a sizable lead.

The beaten and battered truck of Apdaly Lopez would cross the finish line first capturing victory in round 1of the 2018 SST World Championship. Hoffman would cross the line in the second position, followed by teammate Gavin Harlien who would get past Gordon in the closing corners.

Even though a driver may win a race in Stadium Super Trucks, the overall weekend point’s title is earned by gaining points every time a driver is on track in competition and second finishing Jeff Hoffman driving the LIVE entry would be a perfect example of that in Round 1 of the 2018 SST World Championship.

Consistency is the name of the game and Hoffman was able to back that up. Qualifying in the third position, finishing in the second position in the heat race, and following those efforts up with a second place finish in the main event. Hoffman would earn enough points to best Sheldon Creed by 2, and Apdaly Lopez by 3 to capture his first ever SST overall.