Dakar Rally 2018: Kamaz´ Eduard Nikolaev ´We caught Loprais and he caught us´

Relief dunes with sand especially loose this hot season appeared to be a serious challenge on the crews’ way to the finish. After the stage Vladimir Chagin’s question was – on a scale from one to ten how difficult the dunes were, and Eduard Nikolaev answered: "Seven". At 6 a.m. start was already given to the AUTO category. Motorbikes and quads started after them. Therefore by the start time of trucks the race track was already rutted up and down and became an absolute quiz for navigators. 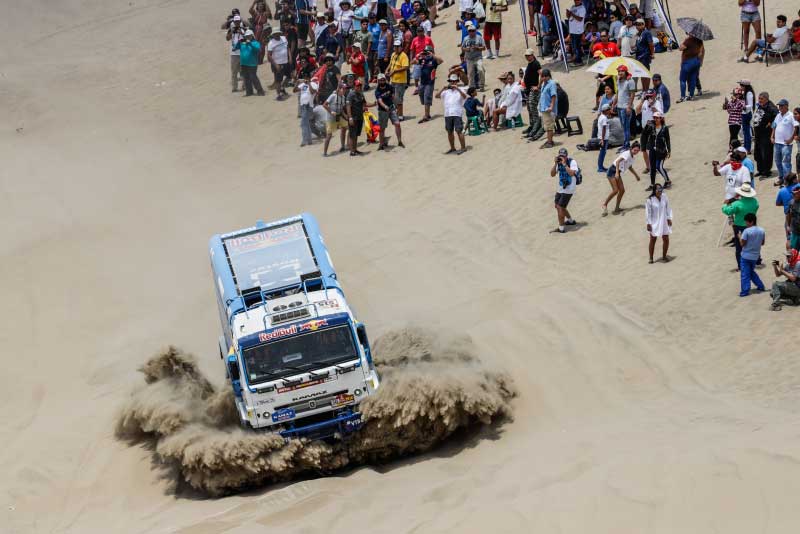 Cool-headedness and quick reaction were two important qualities needed today. From this point Eduard Nikolaev’s crew showed themselves as the best, putting down one more victory on their account on Dakar stages. "After start we caught up with standing Renault of Van Den Brink. It was not clear why he was standing – perhaps, his truck was beaded (note: if pressure is low, tire falls off from the wheel rim)," Nikolaev reported.

"Almost to 100 kilometer there were sands. One can’t say that they were unsurpassable. They were more on vigilance. Dunes were curved and oblique: it was important not to make a mistake, to adjust pressure on time, to engage the needed gear on time. We got into a big funnel. We did not notice it at once – everything merges in the sands. So it was difficult not to get into it. We went out of it from the third time."

"The sand structure is special here. Its bottom is rigid and slopes of the funnel are loose. Here we lost approximately two minutes. Then we caught up Loprais. There dunes alternated with rigid areas. In dunes we caught up Loprais and on rigid terrain he drove fast and caught us. Before the finish there was a small problem with taking the way point." 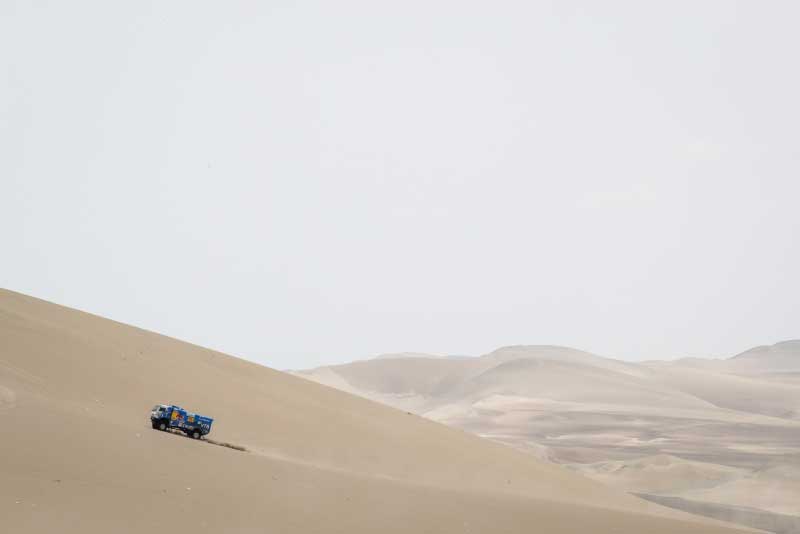 Other Kamaz crews unfortunately were less lucky. In dunes on 68 kilometer of the route Airat Mardeev’s truck fell on its side. The crew of Anton Shibalov came to help. "Everything went well in the beginning of the stage, said Mardeev. "Although there were a lot of stuck crews and it was uneasy to drive among them. Then we saw truck of Anton Shibalov that got stuck in an uncomfortable place. Fortunately we saw him in advance, otherwise we could land onto his top."

"We took ramps," he continued. "The place was uncomfortable but we pulled them out. We lost approximately 20 minutes. Then we drove to this unfortunate funnel, very deep. A lot of cars, trucks, motorbikes were stuck in it. The helicopters were moving around. Loose sand. Cars had ploughed up. It was impossible to drive on a usual track. We found a good track, moved up, but there was a stuck jeep on the top, we started to drive to the right of it and wanted to pass the dune on a slope. I absolutely realized what I was doing and I controlled the truck. But in the loose sand the truck fell on its side."

Dmitry Sotnikov reported: "We started the stage and saw that Anton Shibalov’s crew was “sitting”. There was a loose slope in that place, he probably was driving back and got stuck. We drove to them and pulled the truck out. Then there were sharp unpleasant small dunes. We got stuck twice. Then we got into a big funnel in diameter of several kilometers. It was really difficult to get out of it."

"We took the air out of tires to 1,5 atmospheres. We did several unsuccessful attempts to drive out. Then we cooled the engine a bit. It helped to gain needed power and finally we drove out. In the end we did not take the last way point, we went in a few meters to the left from the track – the point was not taken so we had to come back. Invisible point. Here all contestants moved around – it was much of good luck. In general everything is ok with the truck. There is a small lack of engine power in dunes. Especially when temperature rises we have to adapt to it."