The third stage of the Africa Eco Race was a good day for the Dutch Gerard de Rooy. The captain of Petronas Iveco Team initially crossed the line with a gap of 48 minutes to the buggy of stage winner Mathieu Serradori, but he got 25 minutes back for waiting with a motorcyclist who had crashed. As a result, he came fifth in the results. Wuf van Ginkel was not included in the results. He had to abandon the stage again, this time because of a problem with the engine.

Looking only at the trucks, the advantage of Gerard de Rooy on the others was big again. Jan van de Laar crossed the finish line as the second truck, more than 45 minutes behind De Rooy. But De Rooy is not interested in just the trucks. He wants to win the Africa Eco Race overall. Therefore he now has to make up at least 01:33:57 on Vladimir Vasilyev. 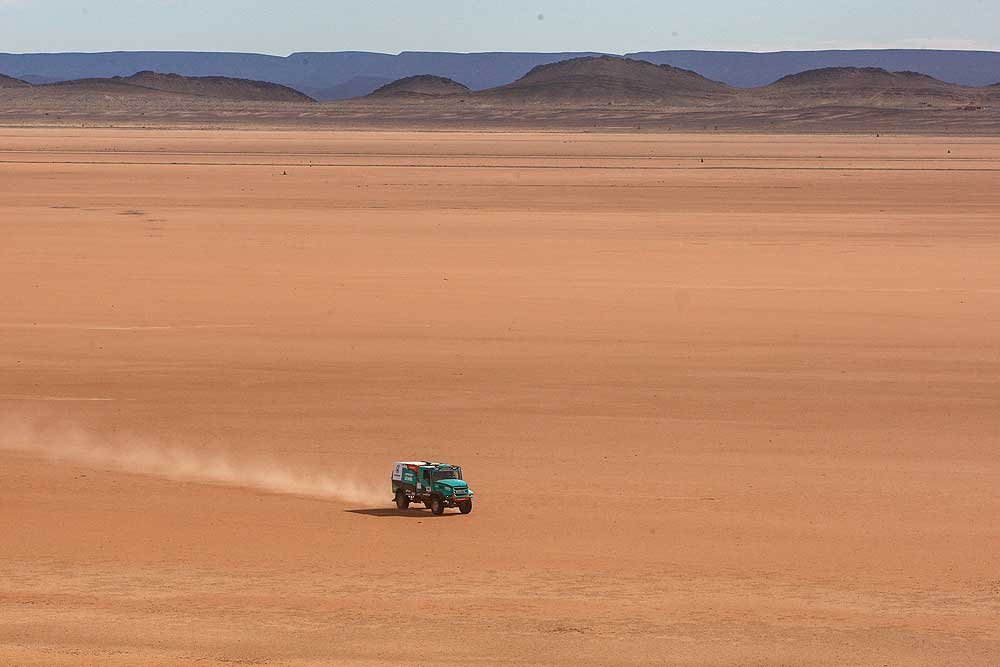 The third stage, with a timed section of 400 kilometers from Foum Zguid to Assa, was not in favor of the trucks. "It was a high speed stage, with lots of stones," describes Gerard de Rooy. "We could make it with a speed of 150 kms/h, but the buggies drove 180, 190. In such a case there isn’t much to gain."

At about 100 kms into the stage De Rooy was the first to stop with a motorbike rider who had crashed. "We waited for help. We got 25 minutes back, but I had the idea we have been there for 35, 40 minutes."

The remainder of the stage went fine, until about 80 kilometers before the finish a band slowly went down. Mechanic Darek Rodewald could pump some air in it while driving, but in the last 20 kilometers the tyre was too badly damaged. "Changing tyres takes more time than moving on carefully," says De Rooy. "But it turned out at the finish that the tread had completely finished." De Rooy was not dissatisfied with the result, but obviously would have preferred to have lost less time.

Wuf van Ginkel in the second Petronas-Iveco suffered considerably more. Already after 60 kilometers he ran into such big problems that he had to leave the stage, just like the second day. And this time he couldn’t do it alone. The truck had to be transported to the bivouac at the back of the trailer.

"First we had to deal with the water reservoir that was broken," says Van Ginkel. "We could repair that, but a little later we got problems with the engine, so we could not go any further. It isn’t clear yet what the exact problem is. We will have to look at that in the bivouac tonight. I hope it can be fixed, but it is a huge disappointment anyway."