Africa Eco Race 2018: Van Ginkel and his crew had to change a wheel six times

The second stage of the Africa Eco Race, with a special of 443 kilometers from Dar Kaoura to Agdal, was a beautiful, but also tough day in which both Petronas Team De Rooy Iveco trucks had a hard time. A broken shock absorber cost Gerard de Rooy an hour of loss of time. Wuf van Ginkel even had to leave the special stage and drive via the road to the bivouac at Foum Zguid.

"The first part of the special we were at rocket speed," opens Gerard de Rooy. In no time he had overtaken the buggy that had started ahead of him, in the dunes of Erg Chebbi, and the first bikers. De Rooy closed in on Vladimir Vasilyev’s X-raid Mini. 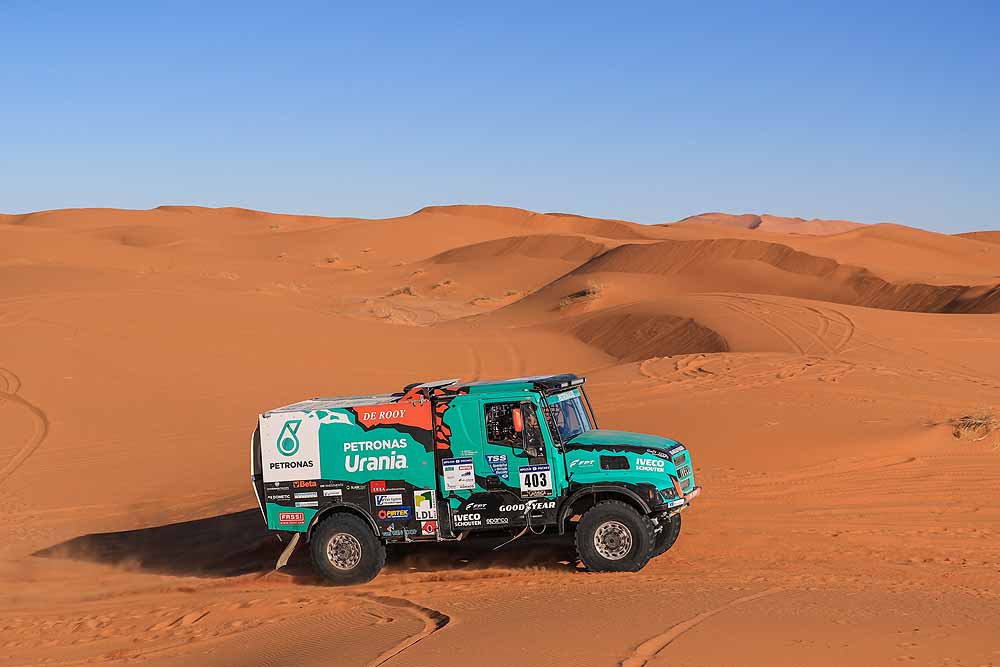 But then things went wrong. On a fast stretch, where the cars and buggies were in favor of the truck, De Rooy got into trouble with one of the brakes. "One of the shock absorbers appeared to be broken. We had to dismantle it, which took a lot of time. Then we had to stop two more times to secure everything again. Because of that broken shock absorber, one of the brakes was broken too. With only three of four brakes through the dunes and some bad stretches with lots of stones; that doesn’t help."

De Rooy was disappointed by the result, because he had liked the special. De Rooy finished in ninth time overall (trucks, cars, motorcycles) at 01:05:46 hours from Vasilyev and Zhiltsov. In the combined standings of cars and trucks he is now seventh at 01:11:11 hours of the Russian Team.

Wuf van Ginkel saw his chances of a good result fading on the second day of the Africa Eco Race. He ran into so much bad luck that he had to leave the race halfway through to reach the bivouac by road. A non-working tire pressure system was the cause of the misery.

Because the system did not work well on one side of the Iveco, mechanic Bert van Donkelaar could not get the right pressure in the tires. In the stage with dunes, sand, fast paths and riverbeds with stones, tire pressure was crucial. The problem caused two tattered tires and one that went down slowly. 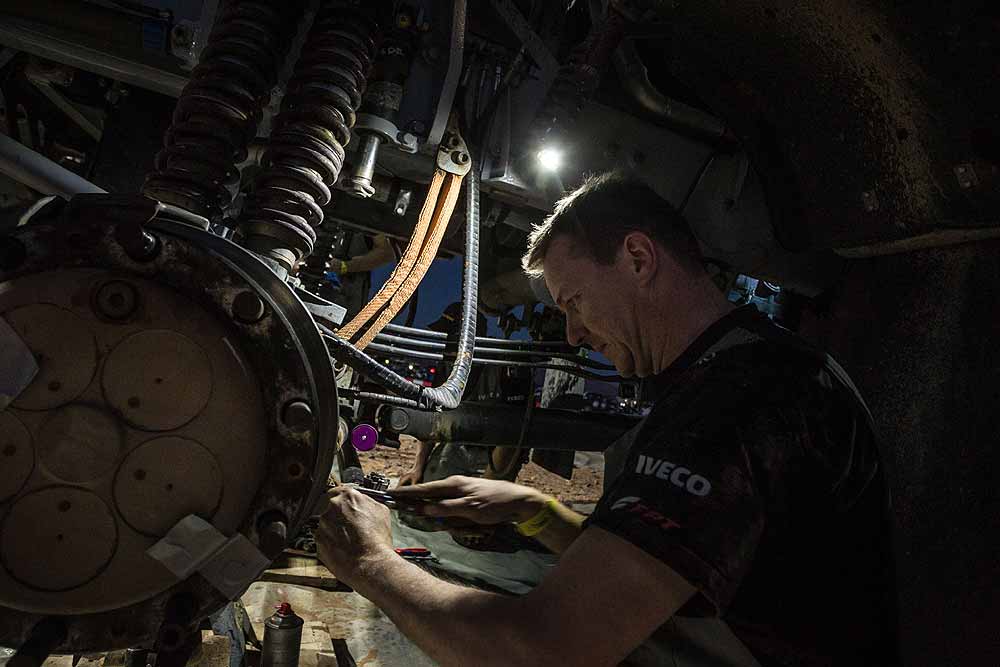 "We have changed the broken tires and the one that ran empty we moved to the other side, where the tire system still worked," says Van Ginkel. "Unfortunately, that was not enough, because the wrong tire pressure caused a steering ball to break, causing another two punctures. Then it was over. The steering axle did not want to go left anymore. I couldn’t continue without steering. Such a shame when a small problem has such big consequences. It went so well." In total Van Ginkel and his crew had to change a wheel six times.

At Mhamid Van Ginkel was able to take the road to drive to the bivouac at Foum Zguid. Because he could not steer to the left, he had to take some turns in reverse. "Right in reverse is also left. It is just a bit more difficult."

After arriving in the bivouac, Van Ginkel needed the time to process his disappointment. "This is a big downer. We are not here to drive via the road. We can forget about the classification now. The only thing we can still hope for is a few nice results day by day."