South Racing Can-Am Team’s Reinaldo Varela and Gustavo Gugelmin began the longest special stage of the Dakar Rally with an overall lead of 44:33 minutes in the SxS category and reached San Juan in Argentina with an advantage of 01:03:27 after recording another fastest stage time. They beat stage runner-up Claude Fournier by 11:42 minutes and closest rival Patrice Garrouste by 18:54 mins on the day. 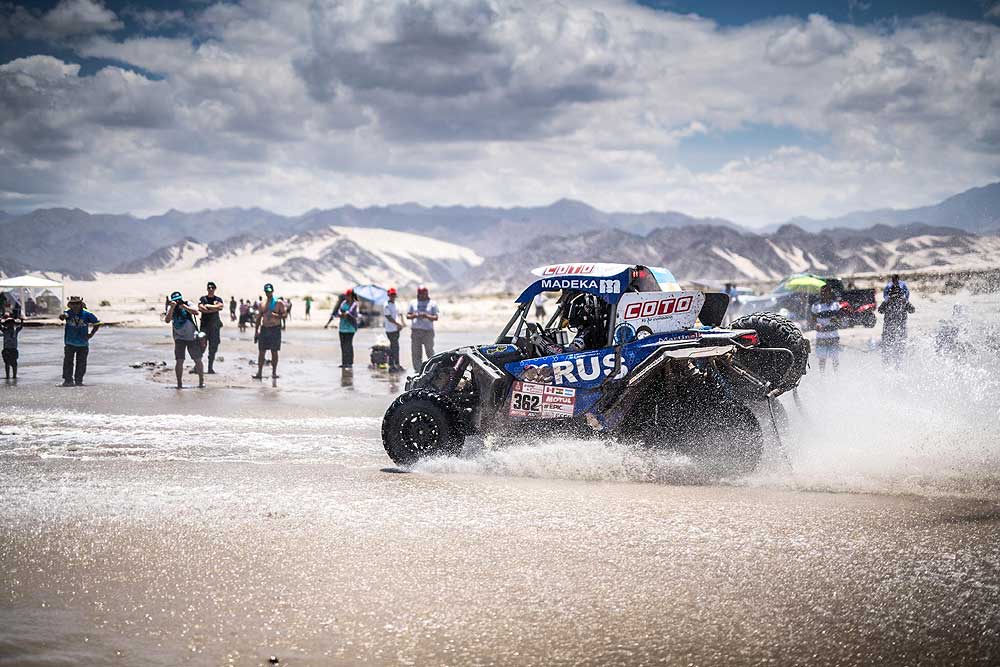 The three South Racing-built Can-Ams made a strong start to the day’s tiring 523km special stage from Chilecito to San Juan. Leonel Larrauri and Fernando Imperatrice had climbed to 7th overall at the start of the day after Peruvian Anibal Aliaga retired from the race and they were the quickest of the SxS contenders through PC1 before dropping over three hours to PC2 and further time waiting for the T4 support truck to repair their Can-Am’s damaged rear suspension.

Varela began the special behind Garrouste and trailed the Frenchman by 1:19 mins to PC1. But Garrouste dropped time over the subsequent kilometers and Varela had extended his virtual overall lead by 16:31 mins at PC2, only to see his on-stage advantage whittled down to just 28 seconds at the end of section one of the special. The Brazilian delivered a polished second half performance, however, to increase his lead to take into the final two days.

Juan Carlos Uribe and Javier Uribe Godoy started the day in 3rd overall in their South Racing-built Can-Am. The Peruvians dropped 15 minutes through PC1 and were running over three hours behind the leading duo at PC1 before stopping with reported electrical issues.

"This was another consistent stage from Reinaldo and Gustavo and they did enough to maintain their lead with two days to go," said Team Manager Scott Abraham. "Unfortunately, Leo, this morning, damaged the front suspension again and had to wait for T4 assistance. He lost several hours and will hopefully arrive later. Juan Carlos has a reported electrical problem but we don’t have any further information at this stage."