Kevin Benavides and Joan Barreda continue to battle on at a swift pace in a highly-complicated fourth stage at the 2018 Dakar Rally. Notable performance from young Chilean José Ignacio Cornejo, the best of the Monster Energy Honda Team in Tuesday’s race. 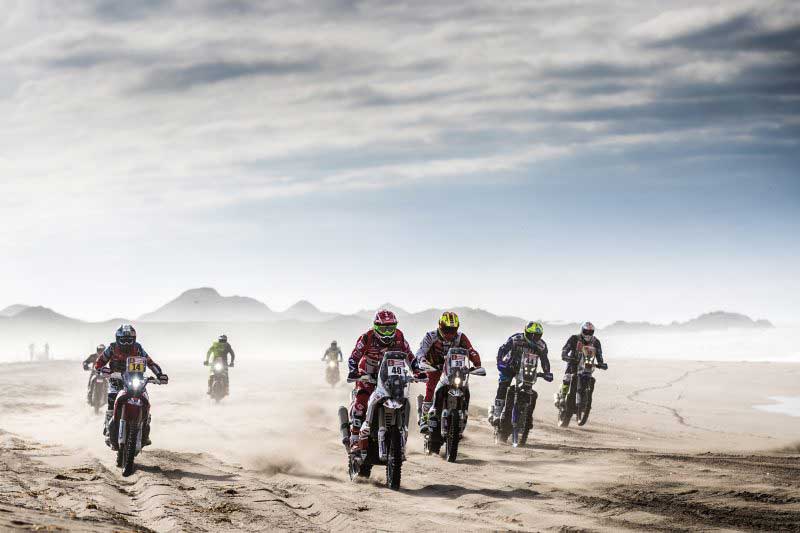 The fourth stage of the Dakar featured a change of format. In place of the usual time-trial start at three minute intervals, the top fifteen riders set off in a motocross-style start lined up across the San Juan de Marcona beach in rows of fifteen riders. Benavides, Brabec and Cornejo started in the first grouping, while Metge and Barreda formed part of the second assault which headed out after a five minute wait.

The team performed well to achieve their objective of landing an optimum starting position for Wednesday’s stage. Joan Barreda went off like a bat out of hell in the hope of clawing back some of Monday’s lost time and found himself leading the field for a large part of the day. Later, in the final stretches, a badly-placed waypoint caused mayhem among competitors who had difficulty pinpointing its exact location. Joan and many others including Michael Metge and Ricky Brabec, dropped valuable time trying to validate it.

"One day everything is fine and then the next day it’s all very sad," said Joan Barreda. "We have to stay focused on the goal. Tuesday with all the difficulties that we had things turned out pretty well as we had planned, because Wednesday is the final day of the sand dunes. We wanted to start out from behind to try attack, so that was perfect." 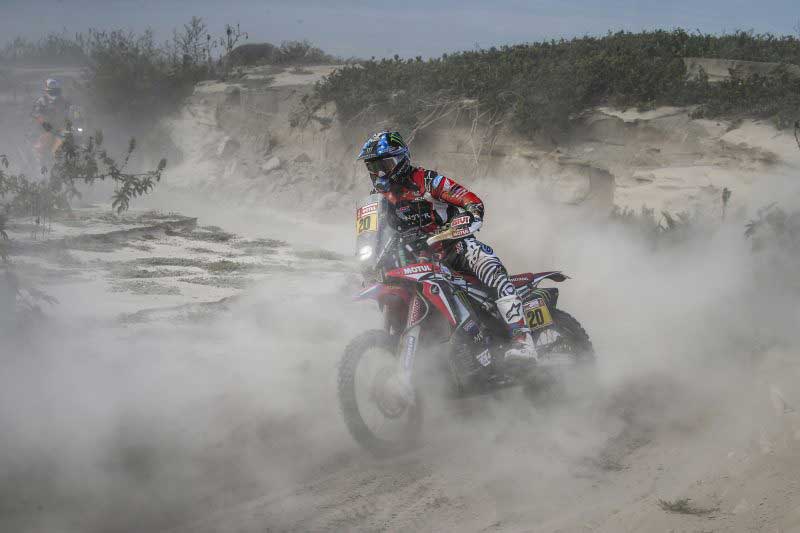 "We had a doubt over a waypoint that didn’t appear to be positioned right and we had to ride around quite a bit to find it and we lost a few minutes in the end. So, it’s a good position. It’s a shame Sunderland is out as he’s one of the strongest rivals. My hand injury was playing up a bit today; it’s not so bad in the dunes but hurts a bit up in the mountains, but I’ll just have to put up with it.

Kevin Benavides, who has celebrated his birthday today, finished eighth on the day and is now third overall after maintaining a good pace without navigational setbacks. "It's been a good birthday," said Benavides. "It was a tough and physically demanding stage. There was a lot of dust after the start and then in the dunes we all got together again. We had a lot of problems on a waypoint that was hard to find. I was able to arrive well and in a position will be just right for tackling Wednesday’s stage."

The best rider of the Monster Energy Honda Team today proved to be young Chilean José Ignacio Cornejo, seventh in both the stage and the special stage, who claimed to have taken it easy.

"Tuesday was an interesting stage with the motocross-style start," stated Raul Castells, Honda Team Manager. "For us it has been a good stage, achieving the goal we set out to achieve. We have the riders well-positioned for the next stage. Kevin rode a good special and also Cornejo, who did really well. Today has better than we thought. Another thing that has happened was that KTM´s Sam Sunderland has suffered a blow to his back and has retired. We hope it is not serious and he recovers soon. More on Wednesday."