Czech Tatra-Phoenix pilot Martin Kolomy of the Buggyra Team achieved the fourth best time in the second stage, despite a collision with a car at abut kilometer 150. "This stage was really demanding, many dunes," Kolomy said after the stage. "The sand was very powdery. We enjoyed an excellent drive. We got stuck in two craters, kind of dune as well, and could not get out. So I had to do some “tobogganing” for a while. There we lost a couple of precious minutes." 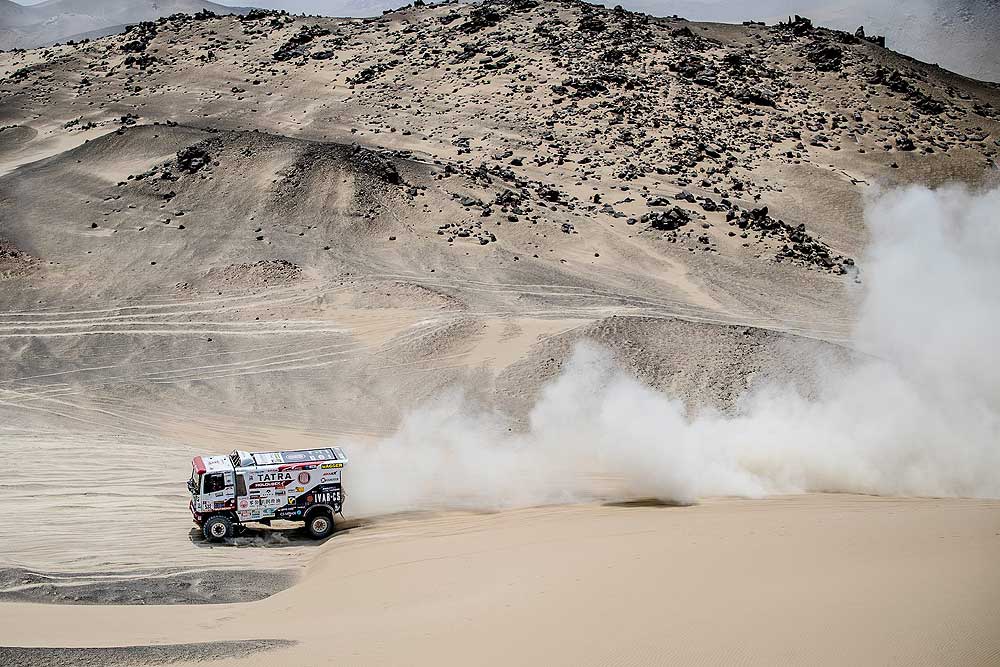 "And all ended by a collision with a passenger car. We turned to the right to pass it and drove nearly on a rock edge but the car turned to the right too until it drove under our truck. So we lost a little there too. But we are still only at the beginning, our Tatra is complete and all right and flew over the stage again. We can continue on Monday," said Kolomy.

The second pilot of the Tatra Buggyra Racing team, Martin Soltys, surprised himself by the fourteenth stage rank. "Unlike SS01, this was demanding indeed, and long as well. We finally ranked fourteenth with an hour and a half loss. Good for a newcomer, I think, we were overtaking rally stars like Ardavichus, and Kamazs, which had some problems. We have so far avoided technology issues, thank God, so I am satisfied at the end of today," was the evaluation of the second stage by Soltys.

Navigator and Dakar-legend Josef Kalina added: "It was really enjoyable, I was shocked what they dared to prepare for us in the first big stage. I quite ache for the newcomers. I must raise my hat to Martin Šoltys, for to drive into such a massacre is really horrible and he managed it excellently,” this is how he praised the newcomer in his crew.

"At one moment we had a little problem with navigation, the boys even climbed to the roof to look into the distance, but they could see as far as the nearest dune only, so I told them not to climb there, that it was no use. We got out of it in the end and here we are in the finish, and all right," finalized Kalina.