The Argentinian truckpilot Federico Villagra has booked his first ever stage victory in the Dakar Rally. The driver of Team De Rooy Iveco finished the third stage over nearly 300 kms, in 03:56:37 and was 35 seconds faster than Eduard Nikolaev. The Russian Kamaz driver keeps the lead in the rankings with the trucks. 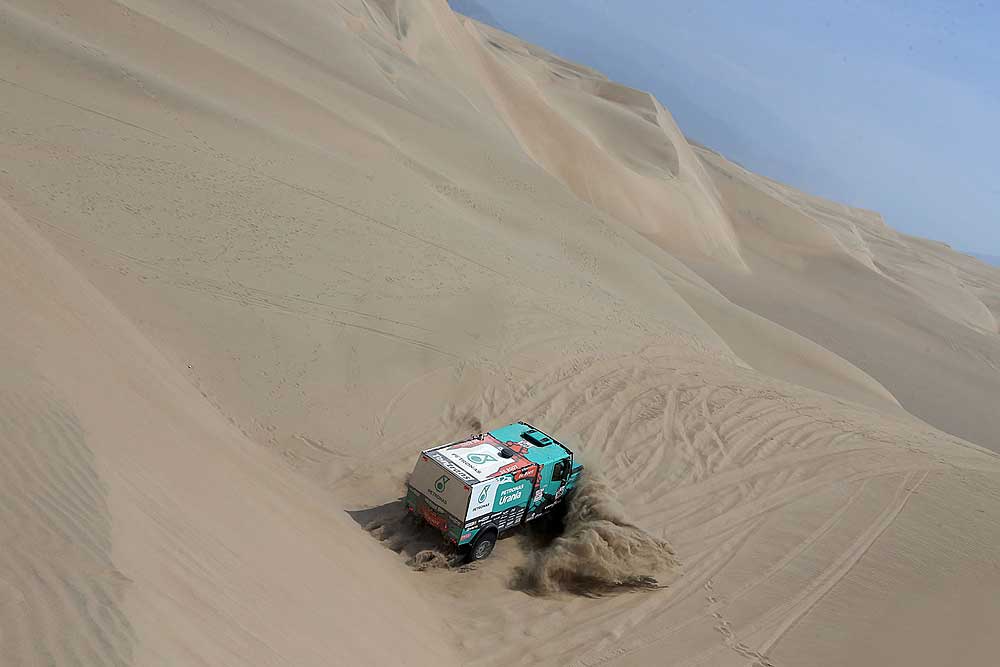 The Argentinian had an excellent day, he told at the finish. "It was a really nice stage," said Villagra. "I’ve had only one small problem: On the top of a dune. That took a few minutes, but otherwise it was only positive." In the rankings the black Iveco with number 501 now occupies second place, at 8:58 from Nikolaev.

Halfway through the stage, which again took place in the dunes around Pisco, it was Villagra’s teammate Ton van Genugten who clocked the fastest time, 45 seconds faster than Nikolaev’s teammate Dmitry Sotnikov. "We were not concerned about the fastest time, but it went very well indeed. It was a fantastic stage, even better than Sunday, with dunes interspersed with fast rally tracks."

On such a transition from dunes to fast it went wrong. "I came out of the sand between two hills and the truck hopped a bit from side to side," says Van Genugten at the finish of the special. "I hit a sort of stone platform with the left front wheel and rolled to the right. In the dunes it’s possible to correct, not here. I had to wait a long time before someone stopped to pull me up. Janus van Kasteren in the Mammoet Renault helped us. We were just on our wheels again when our teammate Artur Ardavichus came along."

The damage to the Iveco Powerstar was limited to a piece of windshield that could be secured with tape. The crew also got away unhurt. "It is the first time that I have toppled over," says Van Genugten. "Extra shame that happened just now, when it went so well. The last part of the stage was  fine again, but then we were already more than an hour behind. It’s a pity, but I’m very pleased that Villagra has won, and that a number of our rivals have also suffered a loss of time."