Laia Sanz is in the saddle of her KTM 450 Rally and on her way to South America for the two-week, 14 stage Dakar. Barcelona-born Sanz has been a revelation at toughest test of endurance motorsports has to offer since making her Dakar debut in 2011. She has returned to race every year since and holds the impressive record of completing each edition of the Dakar she has entered.

"The Dakar has fascinated me since I was a child. Not only the racing, I was hooked on the landscapes in Africa," the 31-year old said. Not only has Sanz been the fastest women at the Dakar a grand total of seven times she also has an overall Top 10 finish to her name. In 2015 she finished as the ninth fastest biker, a remarkable result which included a fifth place finish on a gruelling stage run through Bolivia’s flooded slat flats. 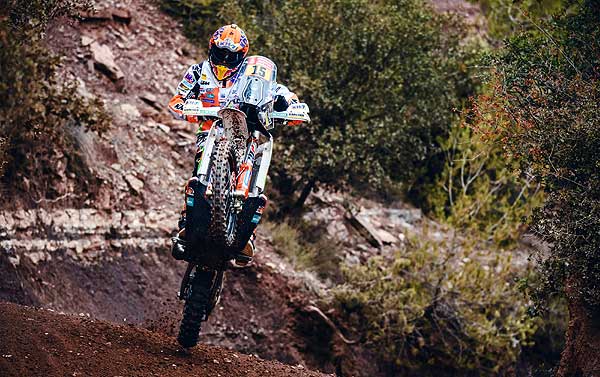 "When I started to compete I was the only girl," Sanz explains. "Luckily nowadays there are other girls doing these races and in a few years there’ll be even more of us competing in the Dakar and Enduro."

Also the German Jutta Kleinschmidt, the only women ever who has won the Dakar Rally, knows about her Talent. "She is young still, but I recommend she changes to cars not too late," she said to the magazine motorsport.com. "My experience is if you stay too long in bikes then it’s too late to learn in cars. She is about the age she should change. I changed to cars when I was 32. I hope she changes to cars soon enough."

Laia Sanz will once again be riding the KTM 450 Rally as she teams up with the Austrian manufacturer that has won the last 16 editions of the Dakar. Sanz and her team of engineers and mechanics will all be out to play their part in keeping this historic run of success alive.

As for Sanz’s own expectations for the Dakar, she wants a repeat of the feeling when she broke into the Top 10 in 2015. However, Sanz is realistic enough to know that there’s a top class field of competition coming to South America so anything inside the Top 15 must be considered a fantastic result. "I’m 100 percent focused on the 2018 Dakar and hoping to achieve a good result!"