Dakar Rally 2018: Qatari Nasser Al Attiyah ´We have every reason to be proud´

"For us, Dakar 2018 was extremely tough," said the Dakar 2nd in the cars, Qatari Nasser Al Attiyah. "But we are very happy to finish in second place overall. Of course, we would have been happier with a win, but to have two of our three cars on the podium, is an amazing achievement, and we have every reason to be proud." 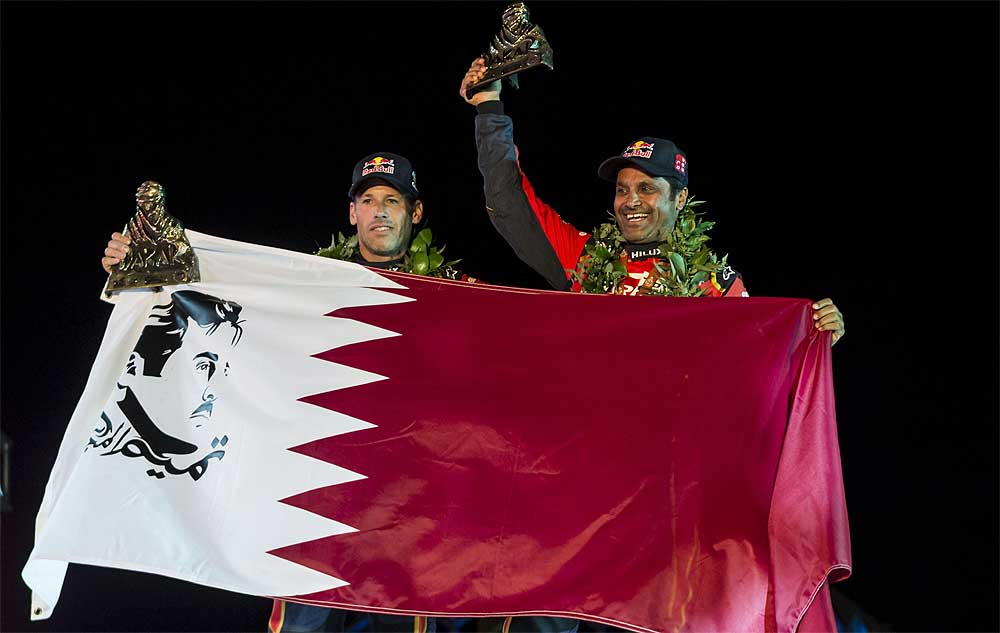 "It is a fantastic result," al Attiyah continued. "It was difficult for us to get into contention but we never eased, continued to apply the pressure and managed to climb on to the second position on the podium. Our latest generation Toyota Hilux has really been born and the team has done a tremendous job throughout the whole race to put us in the best possible conditions. I am confident that we will continue to improve and come back even stronger next year."

Giniel de Villiers from South Africa and Dirk von Zitzewitz from Germany retained their 3rd position in the overall rankings. "Having two Toyotas on the podium is really an incredible result for the brand, especially since it was one of the toughest Dakars in South America," said De Villiers. "It brings back memories of the great days of the Dakar in Africa. The performance of the new Hilux has really improved. It has also been reliable. It’s just a pity we got stuck a little too long. But I prefer to remember the very good overall performance by the whole team!”

The opening stage saw Al Attiyah/Baumel take the spoil, and an early lead on the world’s toughest automotive event. But Stage 2 quickly bit back, as Bernhard ten Brinke and navigator Michel Périn lost time in the thick sand; and Baumel falling ill mid-stage. The pick of the bunch was De Villiers/Von Zitzewitz, who posted the fourth-fastest time on Stage 2. 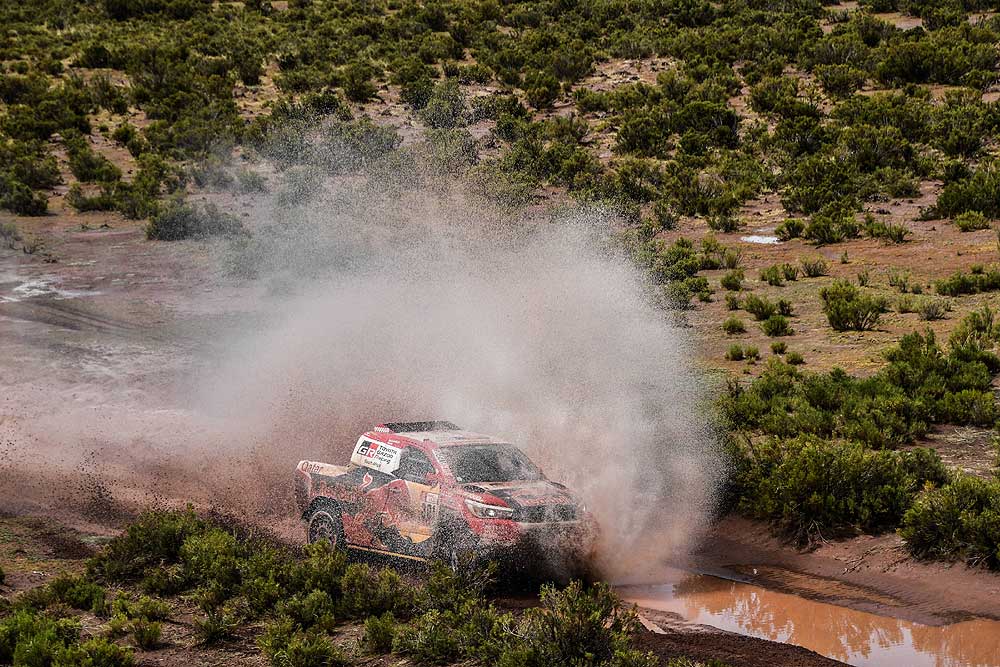 Stage 3 saw Al Attiyah/Baumel bounce back with a second stage victory, while De Villiers/Von Zitzewitz recorded a solid stage, steadying their ship in the process. Ten Brinke/Périn suffered two puntures on the stage, but remained in touch with the leaders despite their troubles. Next came Stage 4, described by Glyn Hall, as ‘a bit of a disaster’ for the team. All three cars fell foul to the fearsome dunes of Peru, with each crew losing time to the four Peugeots, who seemed to be operating on a different planet.

But then, on Stage 5, the team consolidated. The times that day were good, if not stage-winning, but it was exactly what the doctor had ordered. With that said, Ten Brinke/Périn posted the 2nd-fastest time on the day, and at the same time Peugeot’s Sebastien Loeb was forced to retire from the race when his navigator, Daniel Elena, injured his back on a particularly hard landing.

"If anything, Stages 4 and 5 were the two biggest turning points on this year’s race," said Hall from Cordoba. "First, we were tortured in the dunes, and then there was a glimmer of hope, underscored by Bernhard’s stunning performance."

Stage 6 saw the Dakar move into the high altitudes of the Bolivian Altiplano, where the naturally aspirated V8 engines of the Toyota Hilux were at a disadvantage. Even so, all three Toyota Hilux race cars reached the rest day in La Paz without any mechanical difficulties, and the technical crews spent the rest day preparing the cars for stages 7 and 8 – the unsupported Marathon Stages, linking La Paz, Uyuni and Tupiza. 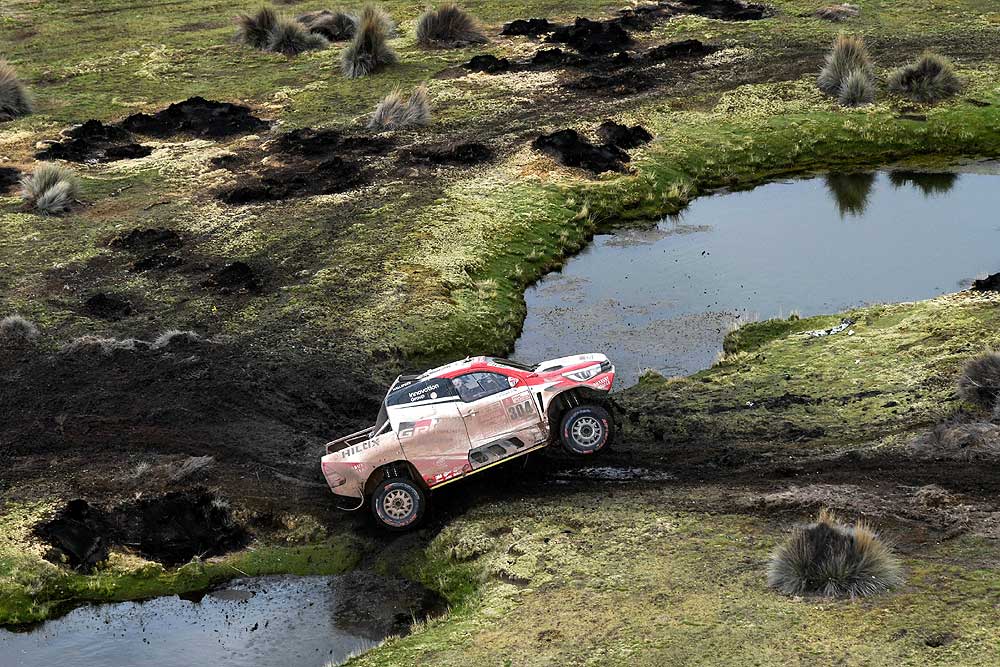 The Marathon stages proved to be no problem for the highly reliable Toyota Hilux race cars, though Peugeot’s Stephane Peterhansel suffered a crash mid-stage, and had to wait for teammate Cyril Despres for assistance. The French driver lost 01:45:00 as a result, promoting Al Attiyah to second place in the overall rankings.

It was a happy reunion with the team in Tupiza, after Stage 8 – and a big relief to have all three cars home undamaged. Stage 9 followed, but was cancelled due to flooding – so next up was Stage 10. A 2nd-place finish for De Villiers/Von Zitzewitz was backed up by a 5th-place for Ten Brinke/Périn. Unfortunately, Al Attiyah/Baumel hit a rock in the latter part of the stage, damaging the rear suspension of the car, and losing nearly half an hour on the day. For the Qatari, it was a stage to forget. "We are so disappointed, because we were actually chasing hard for the stage victory," he said. "It went so well until late in the stage, but what can we do?"

Well, Ten Brinke/Périn certainly knew exactly what to do, as they took on Stage 11 of Dakar 2018 – the much-feared section of dunes known as Fiambalá. The Dutch driver drove a flawless stage to take his first stage victory of the race, by more than four minutes. Both De Villiers/Von Zitzewitz and Al Attiyah/Baumel recorded solid stage performances in Fiambalá, but Ten Brinke’s win stood out as a highlight for many members of Toyota Gazoo Racing SA.

"Winning a stage on the Dakar Rally is always a big thing," explained Hall. "Winning in Fiambalá, however, is something truly magical. And I can’t praise Bernhard and Michel enough for their performance." 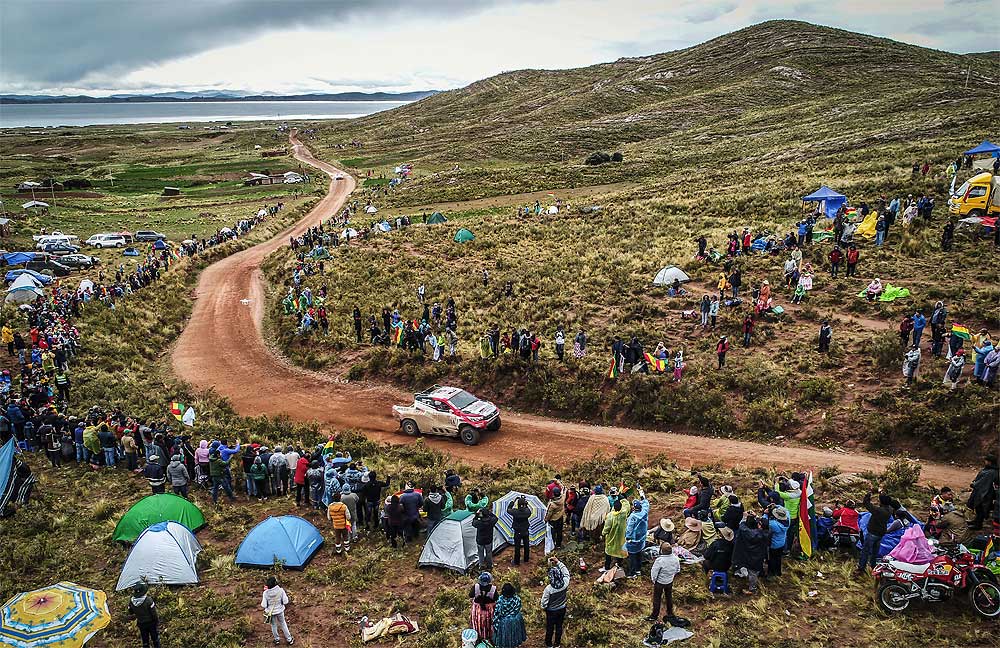 Possibly inspired by Ten Brinke’s performance, Al Attiyah/Baumel took the bull by the horns on Stage 12, winning the stage for the team. De Villiers/Von Zitzewitz again recorded a solid stage, with Ten Brinke/Périn losing time after opening the road. By now the stages were unwinding, and Toyota Gazoo found its cars in 3rd, 4th and 5th positions in the general ranking.

Stage 13 was the last long stage of the race, and the last real opportunity for the top order to change. And, as ever on the Dakar, there was a sting in the tail – not only for Toyota Gazoo, but also for Peugeot’s Stephane Peterhansel.

The French driver crashed on the stage, and lost 57 minutes on the day. This allowed both Al Attiyah/Baumel and De Villiers/Von Zitzewitz to move up one position in the general ranking – putting two of the team’s three Toyota Hilux race cars on the podium.

"At the same time, we received the devastating news that Bernhard and Michel had to retire after an engine problem," said Hall. "This was our first engine failure in half a decade, and we were both surprised and disappointed that it happened. Add to that the fact that only one stage remained in the race, and only one word can describe the feeling: ‘heartbreaking’."

With Peterhansel dropping down the order, and the two Toyota Gazoo cars on the podium, only one thing remained in Dakar 2018: To complete the final, 120 km-long stage without mishap, while De Villiers/Von Zitzewitz fended off Peterhansel for the final podium position. The crew started the stage with 08:08 in hand over the Peugeot driver, and pushed hard to make sure they stayed clear of the hard-charging Frenchman. In the end, De Villiers did more than enough – not only staying ahead of the Peugeot, but winning the stage in the process.

"It is always special to win a stage on the Dakar, and this year we got a win right at the end," said De Villiers. "But more than that, we brought the Toyota Hilux home on the podium, just behind our teammates Nasser and Mathieu. What a fantastic feeling."