Dakar Rally 2018: Ten Brinke - ´We are really moving in the right direction´

Toyota Gazoo Racing South Africa Team’s new Dutch driver Bernhard Ten Brinke paid back his team’s faith with a stunning performance to claim a second ever Dakar stage win on SS11 between Belén and Chilecito in Argentina. His first had been on the short Prologue stage in Argentina in 2016.

Ten Brinke and French co-driver Michel Périn were the fastest of all the car crews through the first section of the special, which featured mixed starts for the first time this year; the leading motorcyclists were intermingled amongst the cars. The Toyota Hilux driver maintained his composure through the closing kilometers, despite punishing heat and treacherous terrain, to win the day’s stage and consolidate fourth in the overall standings. 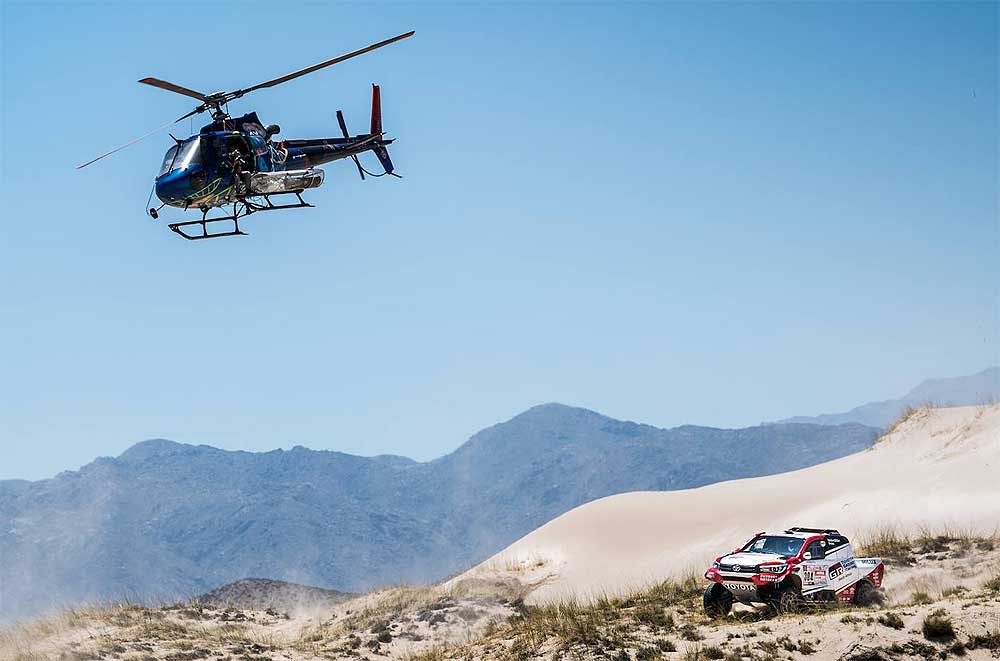 "After a slow first 20km, we came to the fore and have taken advantage of our good starting position," said Bernhard ten Brinke. "After nine days of racing together, Michel and I are really moving in the right direction. I was confident with the Toyota, so we pushed hard and caught some of the competitors who started before us. We realised we were doing well. Michel has been fantastic with the navigation but it will not be easy to open the road in SS12. We’ll do our best."

Nasser Al-Attiyah and French navigator Matthieu Baumel (who celebrated his birthday Wednesday) began the stage 01:12:46 hours off the outright lead and ceded a further two minutes by finishing 4th on the first section of the day’s special. The Qatari finished the special 5th, 1:16 minutes behind Carlos Sainz, and heads into the last three days of the rally, 01:14:02 hours behind the leader.

"It was a very broken stage," said Al Attiyah. "Maybe we decided to use a little too hard suspension set-up and we had two punctures and two wheels. So we finished the last 80km without taking any risks."

South Africa’s Giniel De Villiers and German co-driver Dirk von Zitzewitz were 7th through section one in the third Toyota and finished the stage in 6th, but they dropped 11:57 minutes to Ten Brinke, maintain 5th overall but now trail their team-mate by 12:30mins.

"Going into Fiambalá second on the road is never easy," reported De Villiers. "We tried to limit the damage as much as possible. We lost a few minutes in the vegetation trying to find the right track and were stuck in the camel grass for a short time. Bernhard deserves his stage victory. Congratulations to him. As for us, we will stay in there until the finish."